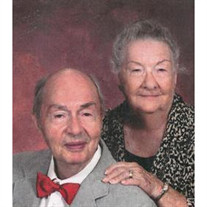 Mary G. Wages   TUPELO - Mary Agnes Graham Wages, 85, of the Palmetto community near Tupelo, Mississippi, died March 19, 2016, peacefully at Sanctuary House hospice in Tupelo after a brief illness. She was born on April 8, 1930, to Douglas Copeland Graham and Fleta May Silas Graham. She spent her childhood in rural Itawamba County, then moved to Palmetto, where she attended Verona High School and Palmetto United Methodist Church.   She married Johney M. Wages in 1948. They lived in Jackson for several years, where she was a vibrant member of the community, a sought-after hairdresser, and also a fashion model who won numerous beauty contests. In 1960, they had a son and moved back to Palmetto the next year. She worked as a beautician at Carmen's Beauty Salon for many years. She was active in Calvary Baptist Church of Tupelo, in the Sunday School program and also annual visitors and volunteers at Ridgecrest Conference Center in the Blue Ridge Mountains of North Carolina. She loved the mountains, especially in springtime. She loved working outside and planting native flowers from Itawamba County, the Blue Ridge, and elsewhere. She was an active supporter of the Itawamba Historical Society, and a member of the Daughters of the American Revolution. She lived at home, and her daughter-in-law helped care for her for the last several weeks.             Mary is survived by her son, Johney M. "John" Wages, Jr. (Gwendolyn Miles); a grandson, Phillip C. Wages (Amber McFarland) of West Plains, MO; two sisters, Annette Post Fowler of Plantersville, MS, and Brenda Joyce Ferguson of Grenada, MS; and two brothers, Lloyd D. "Sonny" Graham of Tupelo and William T. "Bill" Graham of Waco, TX, and a host of much loved nieces and nephews.           She was preceded in death by her parents, her older sister, Nelda Maxine Gilliam, and her husband, Johney Mancel Wages, Sr.           Visitation will be held on Friday, March 25, 2016 from 4 until 8 p.m. at W. E. Pegues Funeral Directors in Tupelo, followed by services on Saturday, March 26, 2016 at 2 p.m. at Calvary Baptist Church of Tupelo, the Rev. Jackie Gray of Mt. Pleasant Baptist Church, Fulton, officiating. Interment will be at Lee Memorial in Verona, immediately following services.   Gifts in lieu of flowers may be made to the Itawamba County Historical Society (itawambahistory.org; PO Box 7, Mantachie, MS 38855) or the Baptist Children's Village (baptistchildrensvillage.com; PO Box 27, Clinton, MS 39060).   Expressions of sympathy may be left at www.peguesfuneralhome.com.

The family of Mary G. Wages created this Life Tributes page to make it easy to share your memories.

Send flowers to the Wages family.