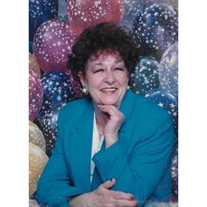 MARY E. SANDLIN Saltillo - Mary E. Sandlin, 85, died January 16, 2016, at North Mississippi Medical Center. She was born September 26, 1930, to George and Mary Putt. She was a lifelong resident of Saltillo where she lived with her husband, Cecil... View Obituary & Service Information

The family of Mary E. Sandlin created this Life Tributes page to make it easy to share your memories.

Send flowers to the Sandlin family.