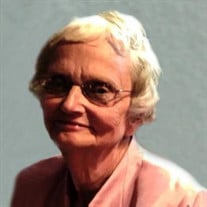 Mary Armstrong Parker O’Neal Tupelo- Mary Armstrong Parker O'Neal, 89, departed this life in the early morning of April 5, 2021 at the Sanctuary Hospice House in Tupelo. She was born in Boynton, Oklahoma on September 5, 1931 to Grady Elzie Armstrong and Allie Creely Armstrong. On April 4, 1952, she married the love of her life, Bobby "Bob" Russell Parker, in Tupelo and made their home there until his death in 1966. She was a 1949 graduate of Tupelo High School as well as of Itawamba Junior College. Mary's desire to teach young children led to teaching kindergarten and sixth grade at Shannon Elementary. Later she was head teacher for LIFT Inc. in Sherman. Her love of literature, poetry, and nature was passed on to her children; she could still recite poems until weeks before her death. Mary's humor, wit, and creativity will be remembered most by those who knew her. Prior to the days of computers she spent many happy hours researching her family's genealogy. Most of all she loved her cats who chose to live with her and love her unconditionally. Many purred their way into her heart and found a loving home! As a faithful member of Gloster Street Church of Christ, she especially enjoyed her involvement with World Bible School. Mary is survived by her daughters, Nancy Parker Frugé Anderson (Clint) of Tupelo and C. Marilyn Parker of Raleigh, North Carolina; her beloved grandsons, Parrish Hunter Frugé (Karis) of Parker, Colorado and Drew Dandridge Frugé (Meghan) of Auburn, Alabama; and her precious great-grandchildren, Parker Adeline Frugé and Eli Bearenger Frugé. She is also survived by her nieces, Linda Davis and Sandra Davis Pitner (Wayne) of Birmingham, Alabama and nephew, John A. Davis (Linda Ellen) of Gainesville, Florida, as well as, her very dear friend, Judy Harper O'Neal. She was predeceased by her parents; husbands, Bob Parker in 1966 and Henry L. O'Neal in 1981; and her son-in-law, Larry Frugé in 2020. Visitation will be 10 until 11 a.m. Wednesday, April 7, 2021 at W. E. Pegues, Tupelo. A private family memorial service will be held at a later date. In lieu of flowers, memorials may be made to Tupelo-Lee Humane Society, 2795 Cliff Gookin Blvd., Tupelo, MS 38801 or Pinevale Children's Home, 1872 CR 700, Corinth, MS 38834. Expressions of sympathy and fond memories may be left at www.peguesfuneralhome.com.

The family of Mary Armstrong Parker O'Neal created this Life Tributes page to make it easy to share your memories.

Send flowers to the O'Neal family.