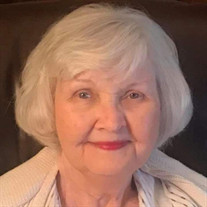 Marilyn Jane Winters Megginson May passed away Monday, April 19, 2021 at the Sanctuary Hospice House surrounded by her children. She was 82 years old. Marilyn was born in Booneville on October 19, 1938, to Paul Johnson Winters and Ruth Marie Smith Winters. She was a dedicated wife and homemaker who spent her life taking care of others. She married David McNeil Megginson on November 23, 1956 and together they raised four children. As her children grew up, Marilyn decided to attend college in order to be better equipped to help those around her. She earned her registered nursing degree and worked for many years in health care, leaving her career to care for her husband whose health was failing. David preceded her in death in December of 2000. On March 14, 2004, she married Harold May who preceded her in death in December of 2017. She was a faithful member of First Baptist Church of Tupelo where she sang in the choir for over 50 years. Marilyn also volunteered at the Sanctuary Hospice House and the Sanctuary Village Thrift Shop. Her family remembers her as a wonderful Christian mother who always put others first. Marilyn was the embodiment of a woman who loved the Word of God and had a servant’s heart. Marilyn leaves behind her children, Paul W. Megginson (Jamie), Kathryn Martin, and Amy Kirby (Chaz); seven grandchildren, Emily Addison (Michael), Andrew Megginson (Amber), Kurt Martin (Rhyanna), Kelsey Megginson Treadwell (Cameron), Konnor Megginson, Dillon Payne (Mandie), and Malorie Payne; nine great-grandchildren, Hayden Dickens, Abby Dickens, Gracie Dickens, Riley Dickens, Samantha Dickens, Westin Martin, Tannor Megginson, Carter Megginson, and Milly Addison; brother, Robert Douglas Winters (Susan); sister, Sandra Kaye Winters Hammack; and numerous nieces, nephews, and cousins. She was preceded in death by her parents; her husband, David; her second husband, Harold; and a son, Steve Megginson. Her grandsons and great-grandsons will serve as pallbearers. Visitation will be 1 until 2 p.m. Wednesday, April 21, 2021 at the First Baptist Church of Tupelo. Services will follow at 2 p.m. with Rev. Matt Powell and Rev. Ricky Young officiating. Burial will be in Tupelo Memorial Park. The service will be live streamed at www.fbctupelo.org and the First Baptist Church Facebook page. W.E. Pegues Funeral Directors is entrusted with the arrangements. Memorials may be made to the Sanctuary Hospice House, PO Box 2177, Tupelo, MS 38803. Expressions of sympathy may be left at www.peguesfuneralhome.com.

Marilyn Jane Winters Megginson May passed away Monday, April 19, 2021 at the Sanctuary Hospice House surrounded by her children. She was 82 years old. Marilyn was born in Booneville on October 19, 1938, to Paul Johnson Winters and Ruth Marie... View Obituary & Service Information

The family of Marilyn Jane Winters Megginson May created this Life Tributes page to make it easy to share your memories.

Send flowers to the Megginson May family.