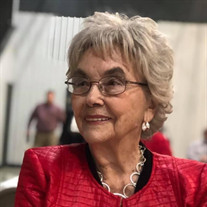 Belden--Delphia Marie Lackey Dickerson, age 93 of Belden went to Heaven on February 25, 2022 at home surrounded by her family after suffering a massive stroke on May 25, 2020. She was born on April 30, 1928 in Tupelo to Robert Elliot and Velma Todd Lackey. The Lackey family was extremely musically inclined and mother grew up playing the piano and mandolin. At the age of 85 she played the mandolin in the Homecoming Band at Belden Baptist Church. A toe tapping song on Sunday morning made her day. She attended and graduated from Sherman High School. She was married to Joe Leon Dickerson for 56 years. He was always the Love of her life. She was a lifelong, faithful member of Belden Baptist Church. She loved the Lord and served Him in many ways. She previously was the Nursery Director, Church Greeter, Sunday School Secretary, Choir Member, on the Homecoming Committee and most recently was responsible for making sure the Pew Racks were orderly and furnished with supplies. She was a member of the Circle of Friends Sunday School Class for many years. She began her career with seven years of employment at Joyner Fields. After leaving there she began a new chapter at Central Service Association in the Data Entry Department. She retired after 36 years of service. She actively participated in the Retirees Club. As a long time member of the Lee County Election Committee at the Belden Precinct she loved assisting voters and just talking to them. She knew almost everyone in the community and enjoyed catching up on their lives and families. She had many loves and passions such as sewing for her “four little girls”, working in the yard with Daddy as well as traveling with him quite often to the Smoky Mountains and Branson. Another passion was being on the Church Ladies Quilting Committee where she helped prepare meals for them. She also helped with the meals for the Wednesday Morning Bible Study. Many days she could be found in her kitchen making cakes to share with church members or neighbors. However her greatest cooking passion was to cook for her family. She embraced every opportunity to spend time with them. Just a few of her specialties included chicken and dumplings, vegetable soup and sour cream pound cakes. She took advantage of every opportunity to spend time with family and traveled with her girls or a daughter and son-in-law. She loved the excitement of New York, the breeze on the Gulf Coast, a lighthouse on the East Coast, the lights of Vegas, the fog over the East Tennessee Mountains, the jewelry at the market in Savanna, the Statue of Liberty (she commented “I never dreamed I would see the Statue of Liberty. Oh how I wish Joe was here”) and the history of our Nation’s Capital and obviously the music in Branson. Her role as “Lala” to her grandchildren and great-grandchildren was one she took on with every ounce of love she could give. She was a “LITTLE LADY” with a “BIG PERSONALITY”. Marie leaves behind her four daughters, Sheila Wood (Jody) of Belden, Sandra Trawick (Carey) of Dora, Alabama, Patti Parks (Bobby) of Belden, and Reeta Roper (Tony) of Belden; eight grandchildren, Brad Smith, Chris Trawick (Kerri), Matt Grubbs, Lindsey Hines (Curt), Caris Snider (Brandon), Casey Trawick (Kelly), Tristam Roper (Melanie), and Robin Carter; 13 great-grandchildren, Jackson and Parker Grubbs, Skyler and Tyler Trawick, Coleman Sapp, Zoe and Allye Snider, Roper and Ford Hines, Bryson Carter, and Merritt, Mayer, and Molly Trawick; three sisters-in-law, Mae Stanley, Juanita Phillips (Gordon), and Carl Annette Huffstutler; and a special friend, Marjorie Grissom. She was preceded in death by her parents, Robert Elliot and Velma Todd Lackey; her husband of 56 years, Joe L. Dickerson; a brother, Langston Lackey and wife, Margie; and a special friend, Jean Braden Golding. Visitation will be 4 until 7 p.m. Tuesday, March 1, 2022 at W.E. Pegues, Tupelo. Services honoring Marie’s memory will be 2 p.m. Wednesday, March 2, 2022 at the Jefferson Street Chapel with Pastors Don Baggett and Shane McGivney officiating. Private family burial will follow. Pallbearers will be Bubba Fairley, Jerry Webb, Bruce Clark, Teddy Golding, Jeff Scott, and Will Brann. Honorary pallbearers will be her grandchildren and great-grandchildren, Judge Thomas J. Gardner III, Ben Thomas, Buddy Clayton, and Danny Golding. The family would like to extend heartfelt thanks to those individuals who assisted in caring for Mrs. Marie in her final days. Her home caregivers included Kathy Riddle, Lela Green, Joyce Venson, Sheila Marie Montgomery, and Saralen Green; Sanctuary Home Hospice nurses and CNAs included Alayna Harris, Mandy Williams, and Camille Kohlhiem; and the Sanctuary Hospice House staff, Nicole Hester, RN, Sheila Stacy, RN, Gail Lee, CNA, and Hannah Frazier, CNA. In lieu of flowers memorial donations may be made to Sanctuary Hospice, PO Box 2177, Tupelo MS 38803; Saint Jude Children’s Research Hospital, PO Box 50, Memphis, TN 38101; or Gideons International, P.O. Box 140800, Nashville, TN 37214. Expressions of sympathy and fond memories may be shared at www.peguesfuneralhome.com.

Belden--Delphia Marie Lackey Dickerson, age 93 of Belden went to Heaven on February 25, 2022 at home surrounded by her family after suffering a massive stroke on May 25, 2020. She was born on April 30, 1928 in Tupelo to Robert Elliot and Velma... View Obituary & Service Information

The family of Marie Lackey Dickerson created this Life Tributes page to make it easy to share your memories.

Send flowers to the Dickerson family.