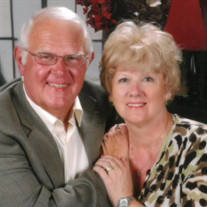 Tupelo- Margaret Elizabeth Davis-Jones, 71, died Tuesday, September 29, 2020 at North Mississippi Medical Center. She was born in Rugby, England, January 13, 1949 to John Wilson and Christina Elizabeth Susan Callaway Foxon. She has been a resident of Tupelo since 1989. On December 27, 2013, she married Jimmy Jones and they enjoyed going on little adventures together such as cruises and weekend getaways. Margaret was a lover of antiques which she enjoyed buying, selling and collecting. She also had a strong love of animals like birds, baby foxes and pretty much anything cute and cuddly. Survivors include her husband Jimmy Jones of Tupelo; two daughters, Angelique Duryee of Rockton, Illinois and Sasha Neuenschwander and her husband, Brad of Roscoe, Illinois; three grandchildren, Zoe Harper and her husband, Kevin of Edgerton, Wisconsin, Thomas James Eddie of Rockton and Sophia Neuenschwander of Roscoe; two brothers, John Foxon and his wife, Nina, and Edwin Foxon all of Newton; and two nephews, Richard Foxon and his wife, Alice of Newton, England and Paul Foxon and his wife, Claire of London, England. She was preceded in death by her parents. Visitation will be 1 p.m. until service time Sunday, October 4, 2020 at W.E. Pegues, Tupelo. Services honoring the wonderful life she lived will be 3 p.m. Sunday, October 4, 2020 at the Jefferson Street Chapel of W.E. Pegues with Rev. Bart Latner officiating. Graveside services will follow in Tupelo Memorial Park. Pallbearers will be Brad Neuenschwander, Ted Ferguson, Jim McCarty, Billy Brown, Lindsey Raspberry and Marty Sparks. Honorary pallbearer will be Bob McCord. Memorials may be made to the Tupelo-Lee Humane Society, P.O. Box 2143, Tupelo, MS 38801. The service will be live streamed and recorded for those who may not be able to attend at www.peguesfuneralhome.com. Expressions of sympathy may be left at www.peguesfuneralhome.com.

The family of Margaret Davis-Jones created this Life Tributes page to make it easy to share your memories.

Send flowers to the Davis-Jones family.