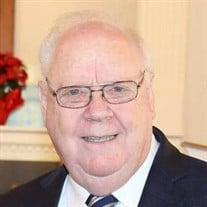 Tupelo- Bro. Lowell Franklin Johnson, 73, went to be with Jesus, Friday, November 27, 2020 at Baptist Memorial Hospital in New Albany. He was born in Meridian, February 12, 1947 to Cecil F. and Ouida Rae Barker Johnson and relocated to Tupelo with his parents in 1950. He was a graduate of Shannon High School, received his Bachelors degree from Blue Mountain and his Masters degree from New Orleans Baptist Theological Seminary. During his younger years, he worked at Sunflower Grocery and went on to serve his country in the Army National Guard for many years. After graduating from Seminary, he faithfully served his Lord in ministry for over 50 years. During this time, he led many churches including: Whittentown Baptist Church, Wallerville Baptist Church, Moss First Baptist Church, Vardaman First Baptist Church, Macedonia Baptist Church (Brookhaven), McDowell Road Baptist Church (Jackson) and Centreville Baptist Church before settling at New Hope Baptist Church for 26 years before his retirement. He was an avid outdoorsman and enjoyed working in the yard doing what most would consider “work” and playing tennis. He was a member of the Lee County Baptist Association as well as the Mississippi Baptist Association serving as a committee member in several capacities with both. Lowell was most recently a member of First Baptist Church Tupelo. Survivors include his wife of 14 years, Sherry Johnson; son, Tim Johnson and his wife, Jennifer of Dumas; three step-children, Stephanie Cagle and her husband, Jerrod of Baldwyn, Wayne Kelly and his wife, Samantha of Mantachie and Elizabeth Kelly Young and her husband, Christian of Arlington, Tennessee; 11 grandchildren, Hunter Johnson, Haley Vick, Kelsey Vick, Sarah Kate Johnson, Cooper Vick, Jake Cagle, Casey Cagle, Jade Cagle, Aubree Kelly, Caitlyn Kelly and Josh Kelly; three sisters, Amelda Armstrong of Tupelo, Darleene Stovall and her husband, Larry of Murfreesboro, Tennessee and Delba Marlin and her husband, Jerry of Mantachie; and a host of nieces and nephews. He was preceded in death by his parents; his first wife, Janice Hill Johnson; and step-son, Lane Kelly. Visitation will be 3 until 5 p.m. Sunday, November 29, 2020 at W.E. Pegues, Tupelo. Services honoring his life will be 2 p.m. Monday, November 30, 2020 at the Jefferson Street Chapel of W.E. Pegues with Rev. Bruce Cappleman and Rev. Jim Futral officiating. Graveside services will follow in Lee Memorial Park. Pallbearers will be Jake Cagle, Casey Cagle, Cooper Vick, Josh Kelly, Andy Gunter and Aaron Walters. Honorary pallbearers will be his fellow Ministers in Lee County, both past and present. The service will be live streamed and recorded for those who may not be able to attend at www.peguesfuneralhome.com. Expressions of sympathy may be left at www.peguesfuneralhome.com.

The family of Bro. Lowell Johnson created this Life Tributes page to make it easy to share your memories.

Tupelo- Bro. Lowell Franklin Johnson, 73, went to be with Jesus,...