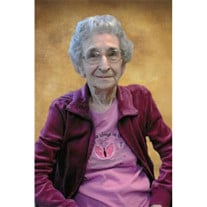 Louise W. Holcomb Chesterville - Louise W. Holcomb, 92, passed away Wednesday, October 19, 2016, at North Mississippi Medical Center in Tupelo after a brief illness. She was born December 20, 1923, in Lee County, to Joel Sylvester and Alma Jackson Wilson. She attended school at East Tupelo High School followed by business school in Memphis. Louise was married to her loving husband, Alvin C. Holcomb, for 59 years until his passing in 2006. She was a bookkeeper for Central Service Association for forty years until her retirement. Louise was also a longtime and faithful member of Chesterville Baptist Church and loved reading her Bible. Some of her favorite pastimes were solving word puzzles, fishing, watching game shows and especially cheering on her Ole Miss Rebels. She was known for her obsession with magnolia leaves. Services honoring her life will be 1 p.m. Saturday, October 22, 2016, at the Jefferson Street Chapel of W.E. Pegues with Rev. Joe Lusby and Rev. Sammy Coker officiating. Burial will be in Chesterville Memorial Cemetery. Survivors include her daughter, Pat Frederick of Chesterville Community; son, Mike Holcomb (Theresa) of Marietta, Georgia; nine grandchildren; 17 great-grandchildren and one great-great-grandson. She was preceded in death by her parents; husband, her son, Doug Johnson; six brothers; four sisters; one grandchild and one great-grandchild. Visitation will be from 4 until 6 p.m. Friday, October 21, 2016, at W.E. Pegues, Tupelo and on Saturday one hour prior to services. Memorials may be made to St. Jude Children's Research Hospital, 262 Danny Thomas Place, Memphis, Tennessee, 38105. Expressions of sympathy may be left at www.peguesfuneralhome.com.

The family of Louise M. Holcomb created this Life Tributes page to make it easy to share your memories.

Send flowers to the Holcomb family.