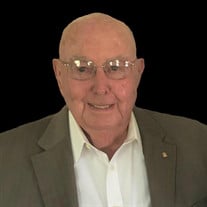 Lewis Touchstone passed away Thursday, April 22, 2021 at his residence in Blue Springs at the age of 91. Born in Beaver Dam, Mississippi on October 26, 1929, Lewis was the son of Ruby Touchstone Smith. After graduation he attended Jones Community College and then proudly served his country in the U.S. Army. He married the love of his life, Ruth Davis Touchstone and they shared 68 years together. Lewis was a faithful member of Calvary Baptist Church where he served as a greeter for over 40 years. Active in his community, he served in many capacities in the Tupelo Lions Club including, district governor, mid-south site chairman, president, vice president, Mississippi Chairman, and treasurer. He was known by so many, as the man who got the glasses for them. Lewis had the heart of a cattleman and loved going to the stockyards to purchase cows along with his grandson. Left behind to cherish his memory include his daughter, Diane Payne and husband Willie of Tupelo; his granddaughter, Melissa Dillard and husband, Stephen of Blue Springs; his great-grandson, Brandon Dillard; and his special friend Cloe Samples whom he loved like a great-granddaughter; great-granddaughter, Linda George and husband Eric, of Austin, Texas; two great-great-grandchildren, Everett and Aubrey George; and a host of cousins, nieces and nephews. Lewis was preceded in death by his Mother, Ruby Smith; his wife, Ruth; a son, Randy Larkin Touchstone; and a grandson, Chad Davis Payne. Visitation will be 1:30 until 3 p.m. Sunday, April 25, 2021 at W.E. Pegues, Tupelo. Memorial Services will be 3 p.m. Sunday with Rev. Jeff Chamblee officiating. Services will be live streamed and recorded for those unable to attend. Honorary pallbearers will be members of the Lions Club. Memorials may be made to the Tupelo Lions Club, PO Box 512, Tupelo, MS 38802. Expressions of sympathy may be left at www.peguesfuneralhome.com.

Lewis Touchstone passed away Thursday, April 22, 2021 at his residence in Blue Springs at the age of 91. Born in Beaver Dam, Mississippi on October 26, 1929, Lewis was the son of Ruby Touchstone Smith. After graduation he attended Jones Community... View Obituary & Service Information

The family of Lewis Touchstone created this Life Tributes page to make it easy to share your memories.

Send flowers to the Touchstone family.