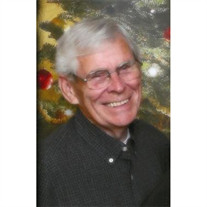 LEROY UTLEY HAIRALD Nettleton - Leroy Utley Hairald, 80, gained his Heavenly wings Friday, September 16, 2016, at Countrywood Manor in Mantachie after an extended illness. He was surrounded by his wife, son, some of the staff and Camellia Hospice Nurses who took such loving care of him after a hard fought battle with COPD. He really loved and enjoyed joking with the staff at Countrywood Manor, and the employees of Camellia Hospice. Leroy was born February 20, 1936, in Parkin, Arkansas to Luther Sharp and Angie Edwards Hairald. He married Mary Payne on May 31, 1958, and they have been married for 58 years. He was a member of Nettleton United Methodist Church. In his earlier years, Leroy worked for Liberty Cash and Dennis Bakery in Grenada. He also lived and worked in Chicago, Illinois for one year. He was a supervisor for Stewart's of Memphis when he married, and worked one more year while Mary taught at John Rundle High School. At the end of 1959, he and Mary moved to Nettleton next door to his in-laws, whom he loved dearly. Leroy began operating a community grocery store, Leroy and Mary's Grocery and did this for 47 years. He dearly loved his customers and whether they had the money or not, they always got what they needed and wanted. Many of them are now deceased. He took over cattle farming when his father-in-law became ill. He later sold all the cattle, retired and closed the store in March of 2006, to be able to spend more time with his only grandson, at that time, Payne. They shared many good times together walking in the pasture, going to see the Flurry's goats, eating summer sausage, and playing with the dogs. Leroy was overjoyed when another grandson, Cooper, joined the family. He then had two grandsons to love and enjoy. He idolized his two grandsons and always smiled when their names were mentioned. They were the light of his life, and he treasured the time spent with them. They affectionately called him "Ole Pop". He dearly loved his son, Shawn, and thoroughly enjoyed their walks on the farm as well as sitting with him in the shooting house on the farm hoping to shoot a deer. Leroy was a graduate of John Rundle High School in Grenada and attended the University of Mississippi. He was a staunch supporter of Ole Miss, and he and Shawn enjoyed many Ole Miss games together. He and Mary attended practically all the athletic games, especially their grandsons' and the Tupelo Tigers, a semi-pro baseball team, all coached by Shawn. Leroy was also a member of the Grenada National Guard for six years. He and Mary traveled extensively throughout the United States as well as over 20 foreign countries in Europe, Asia and South America. They shared many good times on cruises with the last one being in December of 2010, on the maiden voyage of the Allure of the Seas. He always said his favorite trips were to Jamaica, Thailand, China and Norway. Together, they made many friends on these trips. Visitation will be from 4 until 7 p.m. Saturday, September 17, 2016, at W. E. Pegues, Tupelo. Services will be 2 p.m. Sunday, September 18, 2016, at the Jefferson Street Chapel of W. E. Pegues with Rev. Truman Thompson officiating and a special remembrance read by his grandson, Payne. Music will be provided by Martha Mitchell Swindle. A graveside service will follow in New Chapel Cemetery in the family plot. Survivors include his wife, Mary Payne Hairald of Nettleton; son, Burney LeShawn Hairald (Dawn) of Nettleton; two precious grandsons, William Payne and Shawn Cooper Hairald of Nettleton; sisters, Peggy Rodgers of Athens, Alabama and Norma McCormick of Winona and four nieces and three nephews. He was preceded in death by his parents, Luther Sharp and Angie Edwards Hairald; mother and father-in-law, Will Burney and Ivey Lee Berryhill Payne; brothers-in-law, Aubrey Rodgers and Milton McCormick and one great niece. Pallbearers will be Gary Hamm, Stephen Neil Palmer, Fagan Jackson, Wade Hood, Gwin Berryhill and Jimmy Gray. Honorary pallbearers will be staff and friends at Countrywood Manor and Camellia Hospice. Special honorary pallbearers will be Ralph Dale Berryhill, who was best man in his wedding, and his two special grandsons, Payne and Cooper Hairald. Expressions of sympathy may be made at www.peguesfuneralhome.com.

LEROY UTLEY HAIRALD Nettleton - Leroy Utley Hairald, 80, gained his Heavenly wings Friday, September 16, 2016, at Countrywood Manor in Mantachie after an extended illness. He was surrounded by his wife, son, some of the staff and Camellia... View Obituary & Service Information

The family of Leroy Utley Hairald created this Life Tributes page to make it easy to share your memories.

Send flowers to the Hairald family.