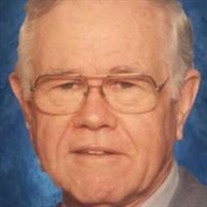 Leonard Ray Shackleford, 97, died Tuesday, June 9, 2020 at his residence. He was born in Itawamba County, December 16, 1922 to Perry and Alcie Ann Eliza Duffy Shackelford. As a young man, he answered his Country’s call to arms and served many years in the Army during World War II. During his Military career, he was stationed at various places including the Aleutian Islands in Alaska and Italy. In 1950, he married Berma Ruth Dillard and their family quickly grew. Later in life, he worked a little in carpentry and television repair before retiring as a machine operator in tool and die. He was an avid painter, often painting landscapes and still life pieces which he would give to his family as gifts and display in his home. He loved gardening and traveling across the United States with his wife. He was a long-time, faithful member of Harrisburg Baptist Church.Survivors include his two daughters, Rhonda Rollins and her husband, Johnny W. of Mooreville and Ann Jill Bonds and her husband, Terry L. of Atkins, Arkansas; three grandchildren, Ben Rollins and his wife, Christine of Tupelo, Matt Rollins and his wife, Lisa of Tupelo, Christina Brooks and her husband, Dale of Dover, Arkansas; five great-grandchildren, Evan and Vivien Rollins of Tupelo and Enoch, Elijah and Ruby Ann Brooks; and his caregiver of eight years, Carolyn Martin to whom the family would like to extend the most heartfelt thank you for the care and love she offered to Mr. Shackelford. He was preceded in death by his parents; his wife of 67 years, Berma Ruth Shackelford; three brothers, Charles, Bill and Derris Shackelford; and two sisters, Lola McVay and Beulah Shackelford. Visitation will be 1 p.m. until service time Friday, June 12, 2020 at W.E. Pegues, Tupelo. Services honoring his life will be 3 p.m. Friday, June 12, 2020 at the Jefferson Street Chapel of W.E. Pegues with Rev. David Smith officiating. A graveside service will follow in Lee Memorial Park. Pallbearers will be Terry L. Bonds, Matt Rollins, Ben Rollins and Dale Brooks. Expressions of sympathy may be left at www.peguesfuneralhome.com.

Leonard Ray Shackleford, 97, died Tuesday, June 9, 2020 at his residence. He was born in Itawamba County, December 16, 1922 to Perry and Alcie Ann Eliza Duffy Shackelford. As a young man, he answered his Country&#8217;s call to arms and served... View Obituary & Service Information

The family of Leonard R. Shackelford created this Life Tributes page to make it easy to share your memories.

Send flowers to the Shackelford family.