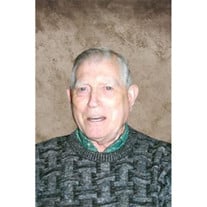 LEON SIMMONS Saltillo - Edward Leon Simmons, 82, passed away Wednesday, February 1, 2017, at North Mississippi Medical Center. He was born August 7, 1934, in Itawamba County to Purdie Dalton and Ernestine Burleson Simmons. Leon graduated from Verona High School and served his country in the United States Army. On April 26, 1958, Leon married Mary Vance Hutcheson. He worked for Kermit's Bakery for 20 years and retired from Lowe's after 15 years in the paint department. Leon enjoyed singing and playing the guitar, and he never met a stranger. In his spare time, Leon was very dedicated to drinking coffee at the Waffle House. He loved spending time with his grandchildren and his dog, Tabby. Leon was a member of Oakridge Christian Church until his health prevented him from attending. Survivors include his wife of 58 years, Mary Vance Simmons of Saltillo; daughter, Lesha Leslie of Pontotoc; grandsons, Brandon Leslie (Nyssa) of Pontotoc and Britt Leslie (Jesse) of Tupelo; great-grandchildren, Lana and Cooper Leslie; sister, Izetta Christian of Dorsey and brother, Carl Simmons of Mooreville. He was preceded in death by his parents; sister, Agnes Anderson and brother, Gene Simmons. Visitation will be from 5 until 8 p.m. Thursday, February 2, 2017, at W. E. Pegues, Tupelo and one hour prior to service time Friday. Services will be 11 a.m. Friday, February 3, 2017, at the Jefferson Street Chapel of W. E. Pegues with Rev. Dale Carr and Rev. Bobby Holland officiating. Burial will be in Lee Memorial Park. Pallbearers will be Delayne Hester, Don Christian, Cary Simmons, Nathan Holcomb and Justin Merritt. Expressions of sympathy may be left at www.peguesfuneralhome.com.

The family of Leon Simmons created this Life Tributes page to make it easy to share your memories.

Send flowers to the Simmons family.