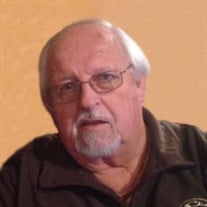 Pontotoc- William Kenneth Hanks, age 81, passed away on Sunday, February 21, 2021, at the Pontotoc Health and Rehab Center where he was a resident and was lovingly cared for by its staff since 2018. Kenneth was born on June 13, 1939 in Pontotoc, Mississippi to Haskell and Marion Hanks. He married his wife, Mary Little Hanks, on December 1, 1956. He served in the Pontotoc Army National Guard from 1956 until 1964. The couple moved to Tupelo in 1964. Most of his adult career was spent with Southern Pipe & Supply, first as warehouse manager and then as a salesman to the hardware and mobile home industries. Due to his vast knowledge and success in sales he was bestowed the honor of their President’s Club. Kenneth and Mary shared an enormous love for softball and coached women’s slow pitch softball for over 20 years. In 1984 Kenneth’s team won the Mississippi Women’s Class C State Championship, leading them to play in the U.S. Regional and National Tournaments in Enid, Oklahoma. After their retirement from coaching, they spent several years running the concession stand at Tupelo’s softball complex in East Heights. For all of his life, Kenneth had a deep-rooted love for hotrods and classic cars, his all-time favorite cars being his “herd” of Mustangs, his ’54 Chevy Belaire and his ’47 Chevy Special Deluxe Coupe. He and Mary were members of the North Mississippi Cruisers and Kenneth was a founding member of the Pontotoc Ridge Runners Car Club. Upon Mary’s passing in 2011, Kenneth moved back to Pontotoc where he was a member of the Harmony Baptist Church. Known by his kind-hearted and quick-witted spirit, he will be dearly missed. He was preceded in death by his wife of 54 years, Mary, as well as both of his parents. Kenneth is survived by their only child, Kenney M. Hanks and his wife, Sarah Anne and his three loving grandchildren, Hunter, Jordan, and Katie Grace all of Orlando, Florida. He is also survived by his sister, Ann Hanks Bailey of Ecru, Mississippi and brother, James “Jimmy” Hanks of Clinton, Tennessee, as well as many nieces and nephews. Kenneth will be entered alongside Mary in the Black Zion Cemetery. A celebration of his life will be 11 a.m. Saturday, June 26, 2021 at the Jefferson Street Chapel of W. E. Pegues. Expressions of sympathy may be left at www.peguesfunrealhome.com.

Pontotoc- William Kenneth Hanks, age 81, passed away on Sunday, February 21, 2021, at the Pontotoc Health and Rehab Center where he was a resident and was lovingly cared for by its staff since 2018. Kenneth was born on June 13, 1939 in Pontotoc,... View Obituary & Service Information

The family of Kenneth Hanks created this Life Tributes page to make it easy to share your memories.

Send flowers to the Hanks family.