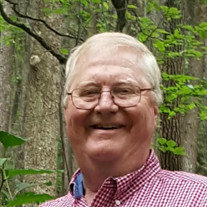 Kenneth Ray Phillips, 72, went home to be with his Lord and Savior on Thursday, August 27, 2020 after a brief illness. He was born May 28, 1948 in Mooreville to Jim “Slick” Phillips and Nannie Lou Oswalt Phillips. Ken graduated from high school, and was then called upon to serve his country in the United States Army during the Vietnam War. During his working career, Ken was a supervisor and worked in management in the finance business. He enjoyed being outside, constantly working on his well manicured yard. Ken also enjoyed building bird houses. He was a member of Auburn Baptist Church and served as a FAITH instructor and as a Sunday School teacher. His faith was vital to him and he always strived to lead others to Christ. Ken loved his family dearly and spending time with his kids and grandkids was a top priority. Ken leaves behind his wife of 31 years, Angela Phillips of Saltillo; two sons, Ken Phillips II of Tupelo and Zach Phillips and wife, Klaire, of Saltillo; five grandchildren, Callie Ann Timmons, Ariel Phillips, Shelby Phillips, Bella-Kate Phillips and Bryce Phillips; a sister, Shirley Parker of Blue Springs; and a host of nieces and nephews. He was preceded in death by his daughter, Nicki Timmons; six brothers, Len, Leon, Charles (Chuck), Jimmy, David, and John Wayne Phillips; and three sisters, Ann McMurry, Ruth Funderburk, and Mildred Criddle. A service celebrating Ken’s life will be 11 a.m. Monday at Auburn Baptist Church with Dr. Ken Anderson and Rev. Jimmy Henry officiating. Steven Cantrell will deliver a eulogy. Burial will be in Eggville Cemetery. W.E. Pegues Funeral Directors is entrusted with the arrangements. Visitation will be 3 p.m. until 7 p.m. Sunday at Auburn Baptist Church. Pallbearers will be Mike VonWert, Danny McMurry, Ben Harrell, Drew White, Cody McMurry, and Keegan Rohrer. Expressions of sympathy may be left at www.peguesfuneralhome.com.

The family of Ken R. Phillips created this Life Tributes page to make it easy to share your memories.

Kenneth Ray Phillips, 72, went home to be with his Lord and Savior...

Send flowers to the Phillips family.