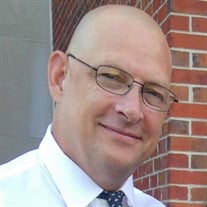 Cpl Ken Hawes Saltillo- His Lord said unto him, well done, thou good and faithful servant...enter into the joy of your Lord. Matthew 25:21 Kenneth Ray Hawes, 55, left this temporary home entering Heaven into the eternal presence of his Savior, Jesus Christ, on Friday, April 16, 2021. Ken passed with the love of his life and his two devoted daughters by his side at their home in Saltillo, Mississippi. Ken’s life exemplified a true servant’s heart as he spent his lifetime in service to God by serving others. Most of all, he was a devoted husband and father who loved and protected his family serving them in numerous ways but especially with his big ole daily hugs that they will miss very much. He served the Lord faithfully as an active member and Deacon at Faith Baptist Church in Saltillo where he and his family attended church. Ken served alongside his wife in the Children’s Ministry for many years. Ken was a retired Corporal from Tupelo Police Department where he held numerous certifications and honors including serving on the Tupelo Police Department honor guard and as an instructor at the North Mississippi Law Enforcement Training Center. In 2018, he was awarded Northeast Mississippi Crime Stoppers Law Enforcement Officer of the Year. He also served honorably with Clarksdale Fire Department and MDOT Law Enforcement during his 30 year career serving and protecting citizens in Tupelo, Clarksdale and surrounding areas in Northeast Mississippi. After retirement, he worked a short year as a Security Officer with the North Mississippi Medical Center before being diagnosed with ALS or Lou Gehrig’s Disease. In addition to a career in public service, he was a talented taxidermist for over 25 years. Ken had a passion for the outdoors and wildlife especially hunting turkey and bowhunting deer. Ken also enjoyed spending time outdoors on the lake with his family. Ken excelled in sports particularly football and baseball while growing up in Clarksdale, where he was born. Ken will be missed greatly by many including his beloved wife of 32 years, Vermon Ray Hawes and his daughters, Mary-Kristian Hawes and Madison Ray Hawes all of Saltillo; siblings, Curt Hawes (Angie) and Tracey Bailey (Todd) of both Clarksdale; three brothers-in-law, Tom Ray (Val), Ted Ray (Rita) and David Ray (Michelle); three sisters-in-law, Peggy Whittington (Cecil) of Little Rock, Arkansas, Dianne Headley (Nolan) of Greenville and Toni Paxton (Galla) of Santa Rosa Beach, Florida; as well as several nieces, nephews and cousins. Ken was greeted in Heaven by his parents, Kenneth M. Hawes and Sharen Hawes; parents-in-law, John Allen Ray and Mary Alice Ray; as well as many other loved ones and friends. Services honoring Ken’s life will be 12 p.m. Tuesday, April 20, 2021 at Faith Baptist Church in Saltillo with Dr. Phil Ellis and Dr. Keith Phillips officiating and will include The Mississippi Department of Transportation’s Honor Guard. Graveside services will follow at Saltillo Cemetery. The family will receive friends following services at 2 until 4 p.m. Tuesday, April 20, 2021 at Faith Baptist Church. W. E. Pegues Funeral Directors is in charge of the arrangements. Masks being worn during services and visitation are encouraged. Pallbearers will be Captain Terry Sanford, Lieutenant Jon Bramble, Officer Richard Franklin, Officer Tremaine Frison, Officer Jay Marshall, and Officer Neil Naron. Honorary pallbearers will be fellow firemen and law enforcement officers from Clarksdale Fire Department, Mississippi Department of Transportation, Tupelo Police Department, and officers of the North Mississippi Medical Center’s Security Team. Memorials may be made to Tupelo Police Athletic League, 204 Douglas Street, Tupelo, MS 38801, Wives of Warriors, C/O Create Foundation, P.O. Box 1053, Tupelo, MS 38802, or Faith Baptist Church, 553 CR 681, Saltillo, MS 38866. Expressions of sympathy and fond memories may be left at www.peguesfuneralhome.com.

Cpl Ken Hawes Saltillo- His Lord said unto him, well done, thou good and faithful servant...enter into the joy of your Lord. Matthew 25:21 Kenneth Ray Hawes, 55, left this temporary home entering Heaven into the eternal presence of his Savior,... View Obituary & Service Information

The family of Cpl Ken Hawes created this Life Tributes page to make it easy to share your memories.

Saltillo- His Lord said unto him, well done, thou...

Send flowers to the Hawes family.