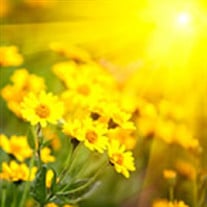 Kathryn "Kay" Cooley Tupelo - Kathryn Cooley died Saturday, August 5, 2017 in the Cottages at Traceway Retirement Community. "Didi" to her San Francisco family was born in San Francisco, CA October 23, 1922 to Bella and George Malliaras. Kay was a graduate of Balboa High School in San Francisco. She was raised in the Greek Orthodox Church. During World War II, she worked as a civilian for the U.S. Army at Fort Mason as a statistician. In 1945, Kay married Bill Cooley, Jr., a handsome sailor from Mississippi. They moved to Tupelo for a couple of years where their daughter, Barbara, was born. They returned to San Francisco where Kay worked for the Bechtel Company and Met Life; she was always a whiz with numbers. In 1959, the Cooley's returned to Tupelo where Kay worked at various companies using her number's skills. She was very active with the Shriner's organization working alongside her husband, Bill, who served as Potentate with the Hamasa Temple. Kay was a wonderful cook and a particularly good baker, her pies being equal to none. She also did beautiful needle point. She attended Harrisburg Baptist Church with her husband for many years. Kay is survived by her daughter, Barbara Bath of Reno; son-in-law, USAF Maj. Gen. Ron Bath (ret.) of Reno; granddaughter, USAF Captain Veronica Bath of Yokota AB, Japan; and her many nieces, nephews and cousins with whom Kay had great affection. She was preceded in death by her parents; her husband; her sister, Helen Klimo; her brother, Tom Miller; her sister-in-law, Jean Miller; her brother-in-law, John Klimo; and nephew, Mike Klimo. Services will be 2:30 p.m. Monday, August 14, 2017, at the Jefferson Street Chapel of W. E. Pegues with Rev. David Smith officiating. Burial will be in Lee Memorial Park.   Visitation will be from 1 p.m. until service time Monday, August 14, 2017, at W. E. Pegues Funeral Directors, Tupelo.   In lieu of flowers, memorial contributions may be made to Sanctuary Hospice House or Regional Rehab Center. Expressions of sympathy may be left at www.peguesfuneralhome.com.

The family of Kathryn "Kay" Cooley created this Life Tributes page to make it easy to share your memories.

Send flowers to the Cooley family.