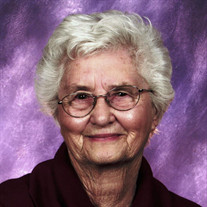 Katherine Barnes Mooreville- Katherine Ruff Barnes at 101 years old, after a long and fulfilling life, met her Lord and Savior in her Heavenly home on Monday, December 6, 2021. She was born on September 29, 1920, in Plantersville. Katherine was the only daughter of Dave and Stella Armstrong Ruff. After graduating from Plantersville High School, Katherine married James Monroe Barnes; they were married for 48 years before his death in 1985. Katherine was a dedicated wife and mother of her four children. She took great pride in raising her children and joy in helping care for her grandchildren. She was affectionately called “Mamaw” by her grandchildren and great-grandchildren. Katherine was a longtime faithful member of Allen’s Chapel United Methodist Church. She enjoyed reading, cooking, and especially traveling. Katherine was loving and kind and although she reached a milestone age, she was always and continued to be self-sufficient, independent, and strong-willed. She is survived by her daughters, Stella St. Romain and her husband, Jerry, of Covington, Louisiana, and Judy Crosby and her husband, Larry, of Mooreville; seven grandchildren, Kathy Adams of Covington, Kevin St. Romain of Covington, Wanda K. Gann of Mooreville, Melissa Stephens and her husband, Terry, of Smithville, Nat Snipes and his wife, Nikki of Tuscumbia, Alabama, Connie Pierce and her husband, David, of Oxford, and Scott Brazil and his wife, Beth of Oxford; 12 great-grandchildren; and eight great-great-grandchildren. She is preceded in death by her husband, James Monroe Barnes; parents, Dave and Stella Ruff; two children, Gradon Ruff Barnes, and Linda Brazil; grandson, Shane Snipes; and two brothers, Graves Ruff and Erskin Ruff. The family would like to express their gratitude to Halcyon Hospice, Tina Wallington, and Kay Gann for all their special care and love this past year. Visitation will be 4 until 7 p.m. Wednesday, December 8, 2021, at W. E. Pegues, Tupelo. Services honoring Katherine’s life will be 11 a.m. Thursday, December 9, 2021, at the Jefferson Street Chapel of W. E. Pegues with Rev. Russell Fletcher and Rev. Sammy Washburn officiating. Graveside services will follow in Gilvo Cemetery. Pallbearers will be Scott Brazil, Nat Snipes, Terry Stephens, Eric Soderstrom, Jeff Roberts, and Jerry Roberts. Memorials may be made to Allen’s Chapel United Methodist Church, 3119 Hwy 178, Mooreville, MS 38857. Expressions of sympathy and fond memories may be left at www.peguesfuneralhome.com.

Katherine Barnes Mooreville- Katherine Ruff Barnes at 101 years old, after a long and fulfilling life, met her Lord and Savior in her Heavenly home on Monday, December 6, 2021. She was born on September 29, 1920, in Plantersville. Katherine... View Obituary & Service Information

The family of Katherine Barnes created this Life Tributes page to make it easy to share your memories.

Send flowers to the Barnes family.