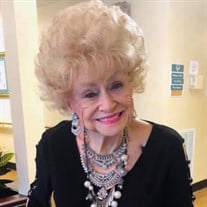 Joyce Doleac Lilah Joyce Hopper Doleac, age 90, of Gulfport passed away peacefully on September 19, 2020. Mrs. Doleac was born in Hattiesburg on June 9, 1930 to Beulah and Robert S. Hopper. Joyce was a Christian who loved the Lord and the Church. Earlier in life, she was an active member of Trinity Methodist Church in Gulfport, where she taught Sunday School and MYU and directed the children’s choir. She occasionally played the piano and organ there. Later in life, she was an active member at First Baptist Church in Gulfport, where she sang in the choir and served as a greeter who handed out programs and worked in the coffee shop. Joyce was also active in her community. She was President of the Gulfport Jaycettes Club, where she was voted Jaycette of the Year in 1960. She was also the Jaycette State Scrapbook Chairman, President of the Twentieth Century Club, and Queen of the Mardi Gras at the Veterans Hospital. Joyce was a Maid and on the Board of La Danse Carnival Krewe for 27 years and made head pieces for the Maids. Joyce was a majorette in the Hattiesburg High School Band for three years. She was a florist and worked in the grocery business, owning Tom Thumb and Broadmoor Grocery, as well as Banning Grocery in Long Beach. She was an avid bridge player and loved her bridge clubs very much. Joyce was preceded in death by her husband of 49 years, Louis P. Doleac (Buddy); and her mother and father, Beulah and Robert S. Hopper. She is survived by her sister-in-law, Joyce Doleac Scott of Hattiesburg; three children, Debbie Norris Clark of Pensacola, Florida, Louis T. Doleac, III. (Lynn) of Lexington, South Carolina, and Tami D. Young (Dr. Ronny) of Tupelo; eight grandchildren, Don Norris Jr. of Pensacola, Damon Norris (Katja) of Pensacola, Jennifer Gilmore (Mike) of Pensacola, Brittany Queen of Lexington, Louis T. Doleac, IV, of Hillsboro, Oregon, Landon Doleac of Lexington, Kyle Young of Birmingham, Alabama, Kara Young Fincher (Caleb) of Birmingham, Miles Young of Tupelo, MS, and Miller Young of Tupelo; and four great grand children, Anton Norris of Pensacola, Oliver Norris of Pensacola, Marin Queen of Lexington and Sutton Queen of Lexington. A celebration of life will be held 11 a.m. Saturday, October 17, 2020 at First Baptist Church in Gulfport. In lieu of flowers, donations can be made to First Baptist Church, Gulfport, 12190 High-way 605, Gulfport, MS 39503 or Methodist Senior Services (Traceway Retirement Community), P.O. Box 1567, Tupelo, Mississippi 38802. In the words of Joyce, “Let this be a sweet celebration. No tears. I’m happy and well now and young again and in no pain. Best of all, I see Jesus. I’m walking barefoot on these Golden Streets singing with the choir.” Expressions of sympathy may be left at www.peguesfuneralhome.com.

Joyce Doleac Lilah Joyce Hopper Doleac, age 90, of Gulfport passed away peacefully on September 19, 2020. Mrs. Doleac was born in Hattiesburg on June 9, 1930 to Beulah and Robert S. Hopper. Joyce was a Christian who loved the Lord and the Church.... View Obituary & Service Information

The family of Joyce Doleac created this Life Tributes page to make it easy to share your memories.

Send flowers to the Doleac family.