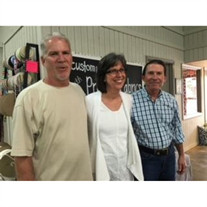 Johnny Hodges Tupelo, Mississippi - John Franklin Hodges, Jr., 71, passed away Thursday, July 19, 2018 surrounded in love by his family and the voices of his grandchildren. Johnny, as he was known by most, was the second of eight children, born in Memphis, Tennessee, to the late Margaret Pera Hodges and John Franklin Hodges, Sr. of Memphis and Tupelo. Johnny led his life with a big heart that effortlessly shared his love to all that were blessed to know him. At the top of that list, The Lord knew the love that Johnny had for Him in his dedicated walk. A man of strong faith, he kept a close relationship to the Lord through constant reading and prayer that left an example of Christ for us to follow. His wife, Sherry, also knew the love that Johnny had for her for over 50 wonderful years. Starting as high school sweethearts, they were always together, supporting one another, modeling a beautiful marriage for their friends and family. His children - Jack (and his special friend, Leigh Anne Duncan), Michael (Laura), and Vince (Heather) - all knew the love that Johnny had for his three best friends. They worked together, played together, and laughed together - having an unbreakable bond that will last forever. And his three grandchildren-Bryce, Benji, and Pera Hodges-as well as Kyleigh Childs and her daughter, Marynn, knew the love that "Popi" had for them as he and "Mimi" spent endless hours traveling, cheering, and embracing them year after year.Johnny was adored by his extra large family and without exception, the feeling was mutual. In addition to his wife, and his sons and their families, Johnny is survived by two brothers Billy and Zeke (Karen) Hodges, five sisters Jackie (Bobby) Stedman, Pat Hodges, Nell (David) Weant, Margaret (Tommy) Thompson, and Leslie (Mike) Sawaya, his two sister-in-laws Brenda Jones and Tammy (Mike) Falconier, and numerous nieces and nephews that never left a conversation with Johnny without feeling a little bit better about themselves. Johnny is also survived by a countless number of friends that may have known him from Tupelo High School and Itawamba Community College, from his work through the years with Jack Hodges & Sons, Best Fiber, Best Foam, and Premier Prints, or even more likely after having met him during his favorite time on the golf course, most fondly with his second family at the Tupelo Country Club. Johnny was a generous man to all that had the fortune of being a part of his life. It's true that he was shorter than most, but he was also stronger than most, better looking than most, in better shape than most, funnier than most, and most of all, kinder than just about anyone you will ever meet. In addition to playing some pretty good golf, he loved to read a good book, take a good walk, and share good food and a good glass of wine. He routinely thought more of others than they thought of themselves, and possibly his most cherished talent was the ability to share a compliment or word of encouragement at just the right time. Johnny was preceded in death by his parents, his in-laws Joseph E. Jones and Johnnie Lee Jones, his sister-in-law Judy Joyner Hodges, and his niece Maggie Thompson Phipps. We are heartbroken, but find some comfort knowing that Johnny has joined this group of angels, and they have already begun a joyous reunion in heaven. We will honor that reunion with a funeral service 4 p.m. Monday, July 23, 2018 at The Orchard Church on Coley Road in Tupelo, Miss., visitation will be 2 p.m. until service time Monday, July 23, 2018 at The Orchard Church. After the conclusion of the services at the Church a celebration of Johnny's life will be held at The Tupelo Country Club. W. E. Pegues Funeral Directors is in charge of the arrangements. Expressions of sympathy may be left at www.peguesfuneralhome.com.Memorials may be made to The Brain Aneurysm Foundation 269 Hanover Suite #3 Hanover, MA 02339 and to The Orchard Church.

Johnny Hodges Tupelo, Mississippi - John Franklin Hodges, Jr., 71, passed away Thursday, July 19, 2018 surrounded in love by his family and the voices of his grandchildren. Johnny, as he was known by most, was the second of eight children,... View Obituary & Service Information

The family of Johnny Hodges created this Life Tributes page to make it easy to share your memories.

Send flowers to the Hodges family.