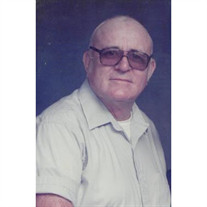 John W. Garrett Shannon- John W. Garrett, 90, died unexpectedly Wednesday, January 11, 2017. He was born April 18, 1926 in Sherman, Mississippi to Clarence Goodman and Minnie Ola Garrett. From 1944 until 1946, John served in the United States Army Air Corps. After serving his country, John worked as a truck driver and was with Super Sagless for 35 years until his retirement in 1995. On November 15, 1947, he married the love of his life, Pearl Garrett, and together they enjoyed 69 years of marital bliss. John was a longtime and faithful member of Calvary Baptist Church in Shannon. He was very independent and was proud of being able to take care of himself at home. He is survived by his wife, Pearl Garrett of Shannon; two daughters, Linda McCullough (Daniel) of Brewer, Margaret Chaney (Jimmy) of Plantersville; two sons, Richard Garrett (Debbie) of Tupelo, Dan Garrett of Shannon; one brother, Harold Garrett of Nettleton; 12 grandchildren; 24 great-grandchildren and 14 great-great-grandchildren. He is preceded in death his parents; one son, Butch Garrett and an infant daughter; one grandson, Anthony Chaney; three sisters, Mary Garrett, Edna Johnston, Thellav Hamilton and two brothers, Tom Garrett and Gardner Garrett. Services honoring his life will be held 11 a.m. Friday, January 13, 2017, at The Jefferson Street Chapel of W. E. Pegues with Rev. Jay Knight officiating. Burial will follow at Old Union Cemetery. Pallbearers will be Richard Garrett, Dan Garrett, Jonathan Garrett, Kevin Coker, Kevin McCullough, and Joey Elliott. Visitation will be from 5 until 8 p.m. Thursday, January 12, 2017, at W.E. Pegues, Tupelo Expressions of sympathy may be left at www.peguesfuneralhome.com.

The family of John W. Garrett created this Life Tributes page to make it easy to share your memories.

Send flowers to the Garrett family.