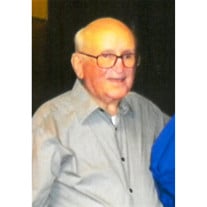 John Sudduth Tupelo- John Andrew Sudduth, 88, died Friday, March 2, 2018 at the North Mississippi Medical Center. John was born October 2, 1929 in Pontotoc to Michael Carlton Sudduth and Flora Bell Weatherly Sudduth. He was the proud owner of Sudduth Transfer,  Storage, Warehouse, Moving and Trucking Business. He is a member of First Baptist Church of Tupelo. In his free time he enjoyed playing golf. Visitation will be 4 until 8 p.m. Sunday, March 4, 2018 at W. E. Pegues, Tupelo. Services will be 11 a.m. Monday, March 5, 2018 at the Jefferson Street Chapel of W. E. Pegues with Rev. Bob O'Neal officiating. Burial will be in Glenwood Cemetery. John leaves behind his three children, Phil Sudduth and his wife, Rosemary of Tupelo, Mike Sudduth and his wife, Debbie of Cedar Grove, Tennessee and Tim Sudduth and his wife, Tammy of Tupelo; one brother, Dan Sudduth of Ashville, North Carolina and grandchildren, Marie Hamilton and her husband, Randy, Earl Walker and his wife, kathy, James Sudduth and his wife, Crystal, Matt Sudduth and his wife, Alicia, Tiffany Robinson and her husband, Jonathon and Trevor Sudduth and 11 great-grandchildren. He was preceded in death by his parents; wife, Shirley Jane Sudduth; brothers, Lamar Sudduth and Carlton Sudduth; sisters, Martha Gandy and Mary Louise Fowler and grandson, Scotty Walker. Pallbearers will be Cody Clayton, Jeff Godfrey, Clyde Godfrey, Stone Hutcheson, Stan Hutcheson and Mike Hutcheson. Honorary pallbearers will be members of the West Main Hardee's Round Table. The service will be live streamed and recorded for those who may not be able to attend at www.peguesfuneralhome.com. Expressions of sympathy may be left at www.peguesfuneralhome.com.

The family of John Sudduth created this Life Tributes page to make it easy to share your memories.

Send flowers to the Sudduth family.