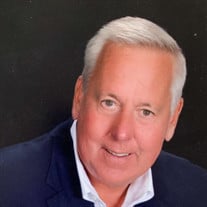 Tupelo--John Murrah Lovorn, Jr. was a devoted husband, father, and friend. He had a big personality and an even bigger heart. He passed away, unexpectedly but peacefully, at his home on July 28, 2021, at age 72. Born in Jackson in 1949 and raised in Fairfax, Virginia, he went to the University of Southern Mississippi where he met the love of his life and wife of 50 years, Elaine Elliott Lovorn. They have two children, Carley (Rob) and Barrett (Molly) and three grandchildren, Rowan, Mary Kiley, and Ben. Papa, as he was known by his grandchildren, liked to spoil them with McDonald’s and all the ice cream you could eat. John started his career in economic development in Greenwood, at the Chamber of Commerce and went on to become Vice President of JESCO. He later joined Chicago-based PHH Fantus as vice president and principal. In 1993, he started his own consulting firm, The Pace Group, now a leading executive search firm with clients in 41 states. He was an inspirational public speaker, a storyteller, and author of “100 Do’s and Don’ts for Economic Development.” John had a generous spirit and strongly believed in second chances. He was constantly working to help someone find a job or get back on their feet. He believed in the potential and general goodness of each person. He had an infectious positive attitude and was often heard telling those around him “You can do anything you put your mind to!” He was an active member of First United Methodist Church in Tupelo, and he and his wife supported numerous charities around Tupelo, including Helping Hands. John was an avid swimmer and swam regularly at the Tupelo Aquatic Center. He loved trivia, politics and sports, and he’d bet you a dollar on just about anything. He liked to root for the underdog - unless his beloved Tennessee Titans were playing. A celebration of his life will be held at 3 p.m. Friday, July 30, 2021, at First United Methodist Church, Tupelo with Rev. Dr. Embra Jackson officiating and Carley Lovorn delivering the eulogy. Visitation is 1 p.m. until service time Friday, July 30, 2021 at the Church. W. E. Pegues Funeral Directors is in charge of the arrangements. Masks are encouraged. In lieu of flowers, memorials may be made to the Tree of Life Free Clinic, 541 Main St., Tupelo, MS 38804, First United Methodist Church Tupelo, P. O. Box 854, Tupelo, MS 38802 or the charity of your choice. Expressions of fond memories and sympathy may be left at www.peguesfuneralhome.com.

Tupelo--John Murrah Lovorn, Jr. was a devoted husband, father, and friend. He had a big personality and an even bigger heart. He passed away, unexpectedly but peacefully, at his home on July 28, 2021, at age 72. Born in Jackson in 1949 and... View Obituary & Service Information

The family of John M. Lovorn, Jr. created this Life Tributes page to make it easy to share your memories.

Send flowers to the Lovorn family.