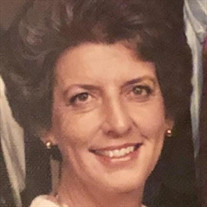 Joann Ashley Williams, 82, of Tupelo, died on Thursday, January 6, 2022, at North Mississippi Medical Center, surrounded by her family. She was born on July 30, 1939, in Pontotoc, to Bertha and Bill Ashley, of Lone Star, in Union County. At age 3, she decided that if her older sister was starting school, she would, too; when she kept showing up at the schoolhouse, the first-grade teacher let her stay. She graduated from Hurricane High School at age fifteen, after having skipped second grade. She put herself through Northeast Mississippi Junior College, ultimately graduating from Delta State University. Like many in her family of athletes and coaches, Joann gravitated toward sports and education: she spent over two decades as a basketball and tennis coach, and taught physical education and health, among other subjects, in the public schools of Amory and then, for 24 years, in Tupelo. After retiring from Milam Junior High, she ran the Amory branch of her late husband’s business, Bill Williams Sporting Goods. She was a member of Harrisburg Baptist Church and a dedicated supporter of various philanthropic causes, particularly the Salvation Army and St. Jude’s Children’s Research Hospital. When she encountered an individual who seemed to need a bit of help, she helped. Joann reveled in activities and events involving her children, grandchildren, and siblings. When she loved or admired something, she did so ardently—Ingomar Basketball, Steph Curry, Peyton Manning. Watching the Tupelo Golden Wave football team win the 1992 state championship was a life highlight—her son played tight end. When her grandchildren were small, she adored babysitting them and often sang to them the Doris Day song that went “I love you a bushel and a peck, a bushel and a peck and a hug around the neck;” she later enthusiastically attended their numerous sports events and graduations. Her television was usually tuned to sports or to the local news at a volume that would blow anybody else’s hair back. She was a dedicated reader of the Tupelo Daily Journal and still clipped articles that she thought might interest others. In her younger years, she enjoyed outdoors activities with her family, particularly water skiing at Nita Lake and Pickwick. (She slalomed beautifully.) She encouraged her children to read by taking them to the Lee County Library and letting them visit the Thomas Street Elementary School library on their own, every summer. She encouraged her kids to excel in tennis ("You can play it when you're 90!") and advised her daughters to learn piano, in case they needed a talent for the Miss America contest. Oxford (Ajax diner in particular) was one of her favorite places. She enjoyed big personalities (“He’s a character” was a compliment), good stories, limeades at Sonic, and, in her later years, puttering around Tupelo, infamously, in her little red car. DigDug, PacMan, and Solitaire were her games, but she also occasionally loved a good visit to the slots at the Mississippi River casinos, in Tunica. Her hummingbird feeders were well maintained for years. Her often baffling stubbornness was part of her charm. She didn’t particularly enjoy cooking, but both her spaghetti and her broccoli-and-cheese casserole were a family hit. She resisted committing to any activity before noon, and was a professional rescheduler of appointments. Joann was especially grateful for her son-in-law and for her many devoted friends. She was indifferent to every dog but the irrepressible, irreplaceable Luna. Years ago, when her health began to suffer, Joann used the opportunity to slow down and deepen her relationship with God. She prayed that when she died God would take her in her sleep, and, more or less, He did. Generous to the end, she has donated her physical remains to science. Visitation will be from 10 until 11 a.m. on Saturday, January 8, 2022 at the Jefferson Street Chapel W.E. Pegues, with a chapel service to follow, officiated by Bro. David Smith. Masks are mandatory for both. Ms. Williams is survived by three children, Paige Williams of New York, NY; Tracey Williams Goggans (Terry) of Tupelo; and Mike Williams of New York, NY; one brother, Norris Ashley of Ingomar; two sisters, Nell Sandroni of Tupelo and Lazette Stevens of Amory; and three grandchildren, Avery, Anna, and Tanner Goggans of Tupelo. She was preceded in death by her husband, Bill Williams, whom the family called Billy; her parents, W.D. “Bill” and Bertha Murphree Ashley; and her brother, Rex Lawayne Ashley. Honorary pallbearers will be her nephews Jonathan Ashley, Bill Ashley, Burt Ashley, Ben Ashley, Todd Sandroni, Brad Sandroni, and Andy Stevens. Expressions of sympathy and fond memories may be shared at www.peguesfuneralhome.com.

Joann Ashley Williams, 82, of Tupelo, died on Thursday, January 6, 2022, at North Mississippi Medical Center, surrounded by her family. She was born on July 30, 1939, in Pontotoc, to Bertha and Bill Ashley, of Lone Star, in Union County. At... View Obituary & Service Information

The family of Joann Williams created this Life Tributes page to make it easy to share your memories.

Send flowers to the Williams family.