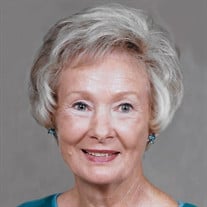 Tupelo- Jo Anne Stallings Harris died Sunday, March 20, 2022. She was born in Meridian, on February 7, 1930, to James Preston Stallings and Bonnie McElroy Stallings. She grew up in Jackson and moved to Tupelo during her high school years. She graduated from Tupelo High School and attended Blue Mountain College. She married Boyce Ervin Harris on October 12, 1950, and made many moves with him during his tour of duty with the Air Force, eventually returning to settle in Tupelo. As an active member of First United Methodist Church she taught kindergarten, Sunday School, Bible School, and accompanied the children’s choirs. After retirement, she entered back into her church work where she was president and long time member of the Altar Guild, a member of the Administrative Council, a member of the UMW, served on the Board of Trustees and Congregational Care Committee. She chaired a committee and completed needlepoint chairs and kneelers for the church sanctuary and chapel. She was a charter member of the Sanctuary Hospice House Auxiliary. Leading a full life as a wife, mother, and career woman she raised her children and then returned to work for GMAC, retiring in 1990. Visitation will be 10 a.m. until service time Wednesday, March 23, 2022 at First United Methodist Church Sanctuary. Services will be 11 a.m. Wednesday, March 23, 2022 at First United Methodist Church with Dr. Embra Jackson and Rev. David Shumarker officiating. Graveside services will follow at Tupelo Memorial Park. Survivors include one son, Hugh Ervin Harris of Tupelo; one daughter, Nancy Jane Harris Holloway and her husband, Ronnie, of Birmingham, Alabama; a sister, Jane Elizabeth Stallings Harris, and her husband Jackson David (Pete) Holland of Jackson; four grandchildren, Jennifer Brooks Holloway, Wesley Harris Holloway, Joseph Tanner Harris, and Addison Elaine Harris. She was preceded in death by her husband of 62 years, Boyce Harris; and her parents, Preston and Bonnie Stallings. Memorials may be made to the First United Methodist Church, P.O. Box 854, Tupelo, Mississippi 38802-0854 or to Sanctuary Hospice House, P. O. Box 2177, Tupelo, MS 38803. Expressions of sympathy and fond memories may be left at www.peguesfuneralhome.com.

Tupelo- Jo Anne Stallings Harris died Sunday, March 20, 2022. She was born in Meridian, on February 7, 1930, to James Preston Stallings and Bonnie McElroy Stallings. She grew up in Jackson and moved to Tupelo during her high school years.... View Obituary & Service Information

The family of Jo Anne Harris created this Life Tributes page to make it easy to share your memories.

Send flowers to the Harris family.