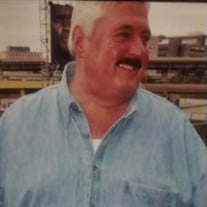 Tupelo—James Gerard “Jimmy” Jalette, 73, passed away Wednesday, February 24, 2021 at the North Mississippi Medical Center after a lengthy illness. The son of Gerard Rosaire Jalette and Kathleen Mary Creighton Jalette, he was born December 17, 1947 in Woonsocket, Rhode Island. His memories in Rhode Island with his family and friends are full of questionable shenanigans, debatable antics and side splitting laughter. He got his feet wet in the car business in Jacksonville, Florida in the late 70’s where he met the love of his life, Missa. He went on to become very successful in the automotive industry traveling up and down the east coast from Florida to Virginia and eventually to Tupelo, MS. JJ lived in Tupelo for the past 20 years and worked as the General Manager of Metro Ford until he retired. A man of many interests, he enjoyed sports, politics, civil war history and all things “American.” He was the first in the car to go see fireworks on the 4th of July and the last to give up on finding “that” house on Christmas Eve with the best decorations. He always found the station with the “oldest” golden oldies for those family trips. He absolutely never missed a chance for a friendly wager. However, no one would take a bet on how much he loved his family. They were adored by him and he was adored by them. As time passed and his health declined, spending time with him at home grew to be the “what a wonderful world”moments. His grand babies could fill up the couch to watch the game and his world was complete. But, if you veered away from “Poppy’s teams; the Red Sox, the Pats and as of late, the Buccaneers; ya betta’ be quiet! Jimmy leaves behind his cherished wife of 44 years, Mary “Missa” Jalette; his children, Jason Anthony Jalette of Richmond, Virginia, Kathleen Mary Jalette of Oxford, and Julia Ann Jalette of Tupelo; eight grandchildren, Kamryn, Molly, Trisha, JP, Mia, Teslynn, Junior, and Lila; one sister, Kathi (Michael) Morris; two brothers, Tommy (Laura) Jalette and Jack Jalette and his dear friend of over 40 years, Rutherford “Ro” Friday. He was preceded in death by his parents and his brother, Charlie. To honor JJ’s wishes, no services will be held. The family will celebrate his life together. W. E. Pegues Funeral Directors has been entrusted with the arrangements. Expressions of sympathy may be left at www.peguesfuneralhome.com.

The family of Jimmy Jalette created this Life Tributes page to make it easy to share your memories.

Send flowers to the Jalette family.