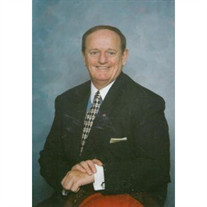 Jim Edwards Tupelo - James Elliott Edwards, a longtime and faithful member of Harrisburg Baptist Church, 75, passed away Monday, October 3, 2016, at North Mississippi Medical Center. He was born September 5, 1941, to Elliott Victor and Beatrice Strange Edwards. Mississippi College he received his Bachelor's of Science in Education in 1962, and his Master's Degree in Education from the University of Alabama. Jim taught school for a few years before he started working for Magnavox Industries in New York. He was an advertising salesman for WTVA, and retired after 20 years, earning top salesman several times. Jim went to Woodstock in 1969. Jim was very involved with the ministries of Harrisburg Baptist Church. He sang in the choir, was a Sunday School teacher and served on various committees. He was especially involved in the Evangelism Committee. For 10 years he was a dedicated FAITH leader and teacher. He was very active in the men's leadership group, Promise Keepers. At his own expense, Jim traveled nationally with the outreach program 'People Sharing Jesus'. Jim was on the nominating committee for the Southern Baptist Convention. Of the 70 committee members, he was one of six chosen to go to Baltimore, Maryland for the convention. He was on the Committee of the Lee County Baptist Association and Celebration Committee for the church celebrating being out of debt. Jim is described as a soul winner with a servants heart for people. He had the spiritual gift of generosity and hospitality and enjoyed having friends over for dinner, that he prepared. Jim was a creative person, always on the cutting edge, a computer wiz and deeply humble. He invested his life in the lives of other people. He was a longtime and faithful member of Harrisburg Baptist Church since the 1970s. Jim genuinely loved the Lord, Jesus Christ with his whole heart, body and soul. He loved others with just like Christ told him to. He both lived and shared the gospel and was a soul winner for his Savior. Survivors include his daughter, Elizabeth Edwards of Saltillo; son-in-law, Brian Garrison (Jane) of Thousand Oaks, California; grandchildren, Caroline and Connor Garrison of Thousand Oaks, California; sister, Barbara Barrows (Gill) of Montgomery, Alabama; nieces and nephews, Donna, Bert and Allison. He was preceded in death by his parents, daughter, Katherine Kristen Garrison in 2013. Visitation will be from 5 until 7 p.m. Wednesday, October 5, 2016, at Harrisburg Baptist Church. Services will be 10 a.m. Thursday, October 6, 2016, at Harrisburg Baptist Church with Rev. Opie Hurst and Dr. Forrest Sheffield officiating. A graveside service will follow in Lee Memorial Park. W. E. Pegues Funeral Directors is in charge of the arrangements. Pallbearers will be Kenny Goralczyk, Mark Stevens, Randy Ramage, Fred Nabors, Earnest Gunter and Ed Page. Honorary pallbearers will be members of the Morrison/Smith Sunday School Class. Memorials may be made to Harrisburg Baptist Church Building Fund, 4675 Cliff Gookin Blvd, Tupelo, MS 38801 or Mt. Olive Baptist Church, 399 Highway 30 West, Baldwyn, MS 38849. Expressions of sympathy may be left at www.peguesfuneralhome.com.

The family of Jim Edwards created this Life Tributes page to make it easy to share your memories.

Send flowers to the Edwards family.