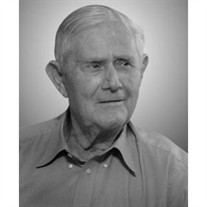 JIM BENSON   Tupelo - Jim Benson, faithful husband, father and friend, passed into eternity on September 28, 2016. He was 92 years old and leaves his wife, Virginia Jo. In May the couple celebrated their 70th year of marriage.   Mr. Benson was the youngest of three children born in Brewer Community to Jim Tom and Quey Benson. He had a sister, Mary (Leech) and a brother, Ned, both deceased.   He spent his childhood on the family farm in Brewer. In 1942, he was drafted into the U. S. Army and served until the end of World War II in the U. S. Army Air Corp, mostly in England.   After WWII he returned to North Mississippi where he met Virginia Jo Mason. Following a short courtship they married and settled in Tupelo. The couple had two children, Judy Franks and Rusty Benson.   For over 40 years, Mr. Benson worked as a diesel mechanic for Scribner Equipment Company in Amory. He was known for his outstanding mechanical ability, dependability and integrity. He retired in 1989, spending much of his time caring for his brother who had been injured in an automobile accident and serving his local church in many capacities.   Mr. Benson was a follower of Jesus Christ and one of the earliest members of Wesley United Church. He often expressed his faith in Christ through active commitment to his church as well as countless deeds done for others.   He was preceded in death by his parents and siblings; a grandson, Justin Franks; and a great-granddaughter, Eliza Benson.   He is survived by his wife, Virginia Jo; daughter, Judy and her husband, Shorty Franks; son, Rusty and his wife, Ann, all of Tupelo; granddaughters, Mason Franks of Tupelo and Emory Kirk (Adam) of Ripley; grandsons, Houston Franks (Meggan) of Starkville, Graham Benson (Peri) of Collierville, Tennessee, Kyle Benson (Gabby) of Tupelo; eight great-grandchildren, Madison and Patrick Franks, Reid and Knox Benson, Griffin and Elinor Benson, Graci Laird, Mattie Ruth and Mary Ford Kirk; nephew Butch Benson (Ann) of Murfreesboro, Tennessee and niece Buffy Garrett of Germantown, Tennessee. Services will be 11 a.m. Friday, September 30, 2016, at the Jefferson Street Chapel of W. E. Pegues with visitation one hour prior to service time. Family friend, Rev. Tim Fortner of Oxford will be officiating the service and burial will be in Lee Memorial Park.   The family would like to give special thanks and appreciation to the staff and caregivers of the Green Houses of Traceway, especially the Coen House staff.   Memorials may be made to Brewer Cemetery (c/o Becky Fish, 333 County Road 855, Shannon, MS 38868) or to the Green Houses (Methodist Senior Services, Inc. P. O. Box 1567, Tupelo, MS 38802-1567. Designate to Green Houses.)   Expressions of sympathy may be left at www.peguesfuneralhome.com.

JIM BENSON   Tupelo - Jim Benson, faithful husband, father and friend, passed into eternity on September 28, 2016. He was 92 years old and leaves his wife, Virginia Jo. In May the couple celebrated their 70th year of marriage.   Mr. Benson was... View Obituary & Service Information

The family of Jim Benson created this Life Tributes page to make it easy to share your memories.

Send flowers to the Benson family.