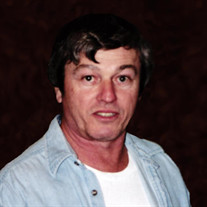 Jerry Scruggs Saltillo- Jerry Thomas Scruggs at the age of 75 went to his Heavenly home on Saturday, November 27, 2021. Jerry was born in Tupelo to Virgil Scruggs and Avo Beatrice Brown Scruggs. Due to his parents’ untimely deaths, he was raised from a young age by his maternal grandparents, Henry Green and Willie James Brown. Jerry married Judy Ann Scruggs and they were married for 30 years before her death. On May 3, 1996, Jerry married Sandra Scruggs. Jerry had an impeccable work ethic and it showed throughout his 35-year career as a tile and flooring expert at Scruggs Tile. His talents were showcased in the National Home and Garden Magazine. In 2003 he was forced to retire due to his failing health. Jerry enjoyed fishing, vegetable gardening, listening to rock and roll music, and was an avid Ole Miss and New Orleans Saints fan. Jerry was known for being kind, sincere, and clever. His quick wit and sense of humor were unmatched. He had a perpetual smile and will be missed by his family and friends. He leaves behind his beloved family to cherish his memory including his wife of 25 years, Sandra Scruggs; children, Debra Scruggs Franks and her husband, Andy Hodges, of Saltillo, Tommy Scruggs of Tupelo, and Shane Scruggs of Tupelo; three step-children, Nicki Herrington and her husband, Garrett, of Hazel Hurst, Gena Dill and her husband, Terry, of Hamilton, and Ryan Carpenter and his wife, Marlee, of Oxford; ten grandchildren; seven great-grandchildren and one granddaughter due in February; one sister, Dorothy Chunn of Saltillo; and numerous nieces and nephews. He is preceded in death by his first wife, Judy Ann Scruggs; parents, Virgil Scruggs and Avo Beatrice Brown Scruggs; grandparents, Henry Green and Willie Mae Brown; brother, Billy Wayne Scruggs and his wife, Scarlett; sister, Willie Mae King; and his adored fur babies, Rebel, and Kadie. Memorial service honoring Jerry’s life will be 1 p.m. Wednesday, December 1, 2021, at the Jefferson Street Chapel of W. E. Pegues with grandson, Rev. Jacob Dickerson officiating. Visitation will be one hour prior to service at W. E. Pegues, Tupelo. Memorials may be made to the America Cancer Society, 1800 W. Main Street, Tupelo, MS 38801. Expressions of sympathy and fond memories may be made at www.peguesfuneralhome.com.

Jerry Scruggs Saltillo- Jerry Thomas Scruggs at the age of 75 went to his Heavenly home on Saturday, November 27, 2021. Jerry was born in Tupelo to Virgil Scruggs and Avo Beatrice Brown Scruggs. Due to his parents&#8217; untimely deaths, he... View Obituary & Service Information

The family of Jerry Scruggs created this Life Tributes page to make it easy to share your memories.

Jerry Scruggs
Saltillo- Jerry Thomas Scruggs at the age of 75...

Send flowers to the Scruggs family.