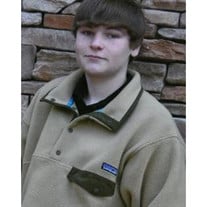 JERAMY J. HOCH Tupelo - Jeramy Jay Hoch, 19, passed away Sunday, November 6, 2016 in Monroe County as a result of an automobile accident. He was born December 30, 1996, in Clearwater, Florida to Danille Short and Jeff Hoch. Jeramy worked in construction for American Drywall. Jeramy enjoyed hunting, fishing and anything involving the outdoors. He loved riding his four wheeler and truck through the mud; if it had wheels on it, Jeramy was riding it. He was a member of the Orchard. Survivors include his mother, Danille Short (Clay) of Tupelo; father, Jeff Hoch (Brenda) of Orlando, Florida; brothers, Chris Roy (Bethany) of Tupelo, William and Jackson Short both of Tupelo; grandparents, Steven Kinney of New Port Richey, Florida, Valerie Hill of Tupelo, Michael and Judy Berkins of Boca Raton, Florida and Jeff and Ellen Short of Tupelo and a multitude of friends. He was preceded in death by his great-grandparents on both sides and his uncle, Eric Roy. Visitation will be from 6 until 8 p.m. Wednesday, November 9, 2016, at W. E. Pegues, Tupelo. Services will be 2 p.m. Thursday, November 10, 2016, at the Jefferson Street Chapel of W. E. Pegues with Rev. Brian Collier officiating and visitation one hour prior to service time. Private family graveside services will be in Tupelo Memorial Park. Pallbearers will be Joshua Blackman, Zack Dudas, Chase Cannon, Tyler Phillips, States Norman, David Ray Thompson and Troy Groover.Expressions of sympathy may be left at www.peguesfuneralhome.com.

The family of Jeramy J. Hoch created this Life Tributes page to make it easy to share your memories.

Send flowers to the Hoch family.