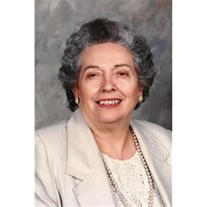 JEANETTE LOWRY WEST Tupelo - Jeanette Lowry West, 95, passed away Thursday, May 11, 2017, at the Greenhouses at Traceway. She was born April 20, 1922, to John Herman and Johnnie Ruth Butler Lowry. She was married to Harry West for 57 years until his passing in 2005. She was a part of the United Daughters of the Confederacy and Pilot Club. Jeanette worked for Lift Inc. in the Head Start program for 30 years and was the Director of Center 9. She finished her early childhood degree in her 70s. Jeanette was a wonderful cook and cooked every meal. She was a long-time member of Harrisburg Baptist Church. Survivors include her children, Kevin West of Tupelo, Rodney West (Milly) of Oxford, Dr. Peter West (Stephanie) of Belden and Adam West (Elaine) of Trophy Club, Texas; grandchildren, Zach West of Las Vegas, Nevada, Jason West of Guntown, Hayden West (Anna Laura) of Jackson, Sanders West of Jackson, Noah West of Belden, Lowry West and Murphy West of Trophy Club, Texas; sister-in-law, Evelyn West of Sun City, Arizona and her special friends at the Simerson House at Traceway. She was preceded in death by her parents; husband; daughter-in-law, Dianne West; sisters, Marie Witt and Ruth Lowry and niece, Karen Capps. Services will be 2 p.m. Sunday, May 21, 2017, at the Jefferson Street Chapel of W. E. Pegues with visitation from 12 p.m. until service time. Graveside services will follow in Black Zion Cemetery. Pallbearers will be her grandsons. Memorials may be made to the Senior or Preschool Fund at Harrisburg Baptist Church, 4675 Cliff Gookin, Tupelo, MS 38801. Expressions of sympathy may be left at www.peguesfuneralhome.com.

JEANETTE LOWRY WEST Tupelo - Jeanette Lowry West, 95, passed away Thursday, May 11, 2017, at the Greenhouses at Traceway. She was born April 20, 1922, to John Herman and Johnnie Ruth Butler Lowry. She was married to Harry West for 57 years... View Obituary & Service Information

The family of Jeanette Lowry West created this Life Tributes page to make it easy to share your memories.

Send flowers to the West family.