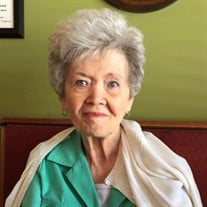 Janie Lamoise Loden Farrar Breeding, 87, went home to be with her Heavenly Father, the Lord Jesus Christ, on Monday, March 7, 2022 at 5:20 a.m., at Comfort Care Nursing Home in Laurel, just two days shy of her 88th birthday. Janie was born on March 9, 1934, in Dorsey. Her family moved to Tupelo when she was a child and moved to Mobile, Alabama during World War II. Her family then returned to Tupelo where she graduated High School and met and married the love of her life, J.E. “Jay” Farrar, who preceded her in death. They lived in many wonderful cities across the Southeastern United States and were members at many great Southern Baptist Churches, where she usually sang in choir and had a heart for missions. Janie was a hairdresser, but the thing she treasured the most was being Mom to her three sons, Ted Farrar of Soso, Terry Farrar of Ocala, Florida, and Scott Farrar of Houston, Texas; and wife and helpmate to Jay. After the death of her beloved Jay in 1992, Janie moved back to Tupelo to live and care for some of her siblings. She married Bill Breeding and they lived in Mooreville until his death. She then moved to Houston, Texas, before settling back in Laurel to be with family, where she lived until her death. Janie gave her life to Christ as a little girl because of her trust that Christ died on the Cross for our sins, and on the third day rose from the grave, showing He is God, He has power over life and death, and that all who call on His name in repentance and faith will be saved and live with Him eternally. On Monday, Janie’s faith became sight and she is now walking the streets of gold in Heaven. It is because of her faith in Jesus that her surviving family, son Ted (Brenda, their children Brandi, Alycia and Matthew), Terry (his daughter Alison) Scott (Stephanie, their children Elizabeth and Jonah) and her ten great-grandchildren have assurance and look forward to being united with her in Heaven one day. She is preceded by death by her husbands, J.E. Farrar and Bill Breeding; her parents, James Allie and Rinnie Mae Loden; and her siblings, Maelene Reschke, John Loden, Jan Loden Breeding, Tim Loden, Audie Loden, James Loden and Jeannie Loden Robinson. Graveside services will be 11 a.m. Friday, March 11, 2022, at Dorsey Cemetery with Ted Farrar officiating. W.E. Pegues Funeral Directors is entrusted with arrangements. In lieu of flowers, the family requests memorials be made to the Missions Ministry at Calvary Baptist Church, 501 W. Main St., Tupelo MS 38804. Expressions of sympathy and fond memories may be left at www.peguesfuneralhome.com.

The family of Janie Farrar Breeding created this Life Tributes page to make it easy to share your memories.

Janie Lamoise Loden Farrar Breeding, 87, went home to be with...