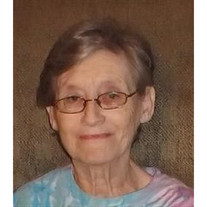 Janice W. Caygle Auburn Community - Janice W. Caygle, 71, passed away Monday, January 30, 2017, at the Sanctuary Hospice House. She was born September 29, 1945 in Seattle, Washington to George Stephen and Warda Perry. She married Robert W. Caygle on October 30, 1965. Janice was a housewife and mother for 51 years, raising her three children while her husband served our great nation in the United States Army. After military life, they retired to Tupelo in 1983 in the Auburn Community. She enjoyed life with her husband, just being with him and the rest of her family. She leaves behind a husband of 51 years, Robert W. Caygle; sons, Steve Caygle (Susan) of Plantersville and Laverghn Caygle (Dawn) of Dorsey; daughter, Tami Brown (Brad) of Auburn; grandchildren, B. J. Brown, Channing Caygle, Wesley Caygle, Sarah Caygle and Clay Caygle; brother, Dave Perry of Seattle, Washington. She leaves behind great friends and family who loved her very much. She was preceded in death by her parents. Visitation will be from 12 p.m. until service time Wednesday, February 1, 2017, at W. E. Pegues, Tupelo, and was held 5 until 9 p.m. Tuesday, January 31, 2017. Services will be 2 p.m. Wednesday, February 1, 2017, at the Jefferson Street Chapel of W. E. Pegues with Rev. Kevin Clayton and Rev. Danny Balaint officiating. Graveside services will follow in Crossroads Cemetery. Pallbearers will be B. J. Brown, Channing Caygle, Wesley Caygle, Craig Caygle, Cody Enlow, Matt Graham, Brad Sartin and Allen Brown. Honorary pallbearers will be Sarah Caygle, Clay Caygle and members of the Dorsey Friendship and Union Fire Departments. Expressions of sympathy may be left at www.peguesfuneralhome.com.

The family of Janice W. Caygle created this Life Tributes page to make it easy to share your memories.

Send flowers to the Caygle family.