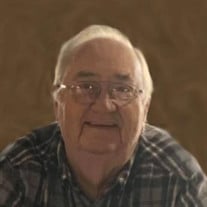 Tupelo- James Edward Simmons died Monday, October 11, 2021, at North Mississippi Medical Center. He was born on October 23, 1940, and was the only child of the late Milton Edward Simmons and the late Claribel Weathers Simmons. On May 19, 1963, he married Sandra Alicia Weaver and they were blessed with 58 years of marriage. James earned both his Bachelor’s and Master’s degrees in Education from Mississippi State University. During his 30 year career as an Agriculture teacher, he had multiple accolades which included being the first teacher in the state to incorporate horticulture into his curriculum. He also coached basketball and was the Future Farmers of America (FFA) Advisor which he thoroughly enjoyed. He retired from education in 1991 after teaching 15 years at Mooreville High School. His hobbies included playing league softball back in his early days as well as following and endlessly supporting the MSU Bulldogs. One of his greatest joys was spending time with his family, particularly his grandchildren who he loved and adored. James was a man of many talents and achievements. He had a passion for music; he began his musical career at the age of 4, began studying classical piano at the age of 8, and performed for Elvis at the age of 15. He continued his musical pursuits by being a member of multiple bands which included being a staff musician for the Mornin’ Show with Buddy and Kay Bain. James was a song director for 63 years, 50 of those being at his home congregation, East Main Church of Christ in Tupelo. Additionally, he was an active member of the North Mississippi Musicians Association and the owner of Lakeland Recording Studio. He was a trained electrician and a licensed landscaper, and he owned and operated Simmons Greenhouses and Landscaping as well as Mooreville Greenhouses until his health no longer allowed. He is survived by his wife, Sandra Simmons; three children, Thomas Edward “Eddie” Simmons (Jeannie) of Tishomingo, Alicia Smith (Joe) of Saltillo, Amanda Dickinson (Jason) of Mantachie; six grandchildren, Hannah Stanley, Ashton Smith, Ben Stanley (Abby), Lexie Dickinson, Britton Smith, Jacie Dickinson; one aunt, Nadine Jones of Saltillo; and one uncle, Gill Simmons (Sarah) of Tupelo. Visitation will be 10 a.m. until service time Saturday, October 16, 2021, at East Main Church of Christ. Services honoring James’s life will be 12 p.m. Saturday, October 16, 2021, at East Main Church of Christ with Minister Barry Kennedy officiating and Mark Hitt, Dennis Hallmark and Mike Ratliff providing the eulogies. Graveside services will follow in Eggville Cemetery. During all services mask are encouraged. W. E. Pegues Funeral Directors is in charge of the arrangements. Pallbearers will be Mike Childers, Jason Dickinson, Bobby Joe Lindley, Kent Nichols, Hugh Scribner, Britton Smith, Joe Smith, Jimmy Spearman, Ben Stanley, and Chad Willis. Honorary pallbearers will be Wayne Brown, Tim Davis, Bill Hagan, Bill Martin, Paul Reed, and Steve Kelly. Memorials may be made to Pine Vale Children's Home, 1872 County Road 700, Corinth, MS 38834. Expressions of sympathy and fond memories may be left at www.peguesfuneralhome.com.

Tupelo- James Edward Simmons died Monday, October 11, 2021, at North Mississippi Medical Center. He was born on October 23, 1940, and was the only child of the late Milton Edward Simmons and the late Claribel Weathers Simmons. On May 19, 1963,... View Obituary & Service Information

The family of James E. Simmons created this Life Tributes page to make it easy to share your memories.

Send flowers to the Simmons family.