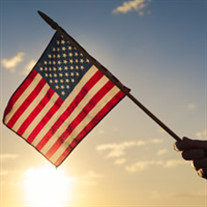 James McCaine   Tupelo - James McCaine, 85, passed away Tuesday, September 26, 2017 at his home unexpectedly. He was born May 29, 1932 to Ervin Madison and Lottie Dee McCaine.   James enlisted in the United States Army and served in the Korean War. Upon returning home, he received his Graduate Equivalence Degree. James worked for Tupelo Public Works as a driver for more than 20 years and for the North Mississippi Medical Center as a bus driver and, later, a courier for 10 years. James enjoyed camping, tending to his lawn and spending time with his family. He was a member of Anchor Baptist Church.   Jane McCaine of Tupelo, James' wife of 19 years, bids goodbye to the love of her life. James also leaves behind one daughter, Janice Hardwick (Randy) of Saltillo; one son, Joel "Marty" Burcham of Tupelo; three brothers, Billy McCaine of Memphis, Junior McCaine of Pontotoc and Carl McCaine (Clemmy) of San Antonio; six grandchildren; and ten great-grandchildren.   He was preceded in death by his parents; two brothers, Tommy and Geraldine McCaine; one sister, Mildred Swan; one daughter, Lajuana McCaine Jones; and one step-son, Bro. Ted Burcham.   Services will be 11 a.m. Friday, September 29, 2017 at the Jefferson Street Chapel of W. E. Pegues with Rev. Don Sparks officiating. Burial will be in Lee Memorial Park.   Pallbearers will be Matt McCaine, Larry McCaine, Channing Upton, Drew Burcham, Sam Self and Terry McCaine.   Visitation will be from 5 until 8 p.m. Thursday, September 28, 2017 at W. E. Pegues, Tupelo.   Expressions of sympathy may be left at www.peguesfuneralhome.com.

James McCaine   Tupelo - James McCaine, 85, passed away Tuesday, September 26, 2017 at his home unexpectedly. He was born May 29, 1932 to Ervin Madison and Lottie Dee McCaine.   James enlisted in the United States Army and served in the... View Obituary & Service Information

The family of James McCaine created this Life Tributes page to make it easy to share your memories.

Send flowers to the McCaine family.