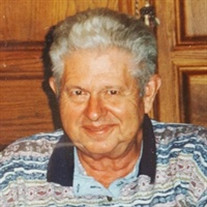 Jacob A "Buster" Mallory, 87, passed away Sunday, December 17, 2017, at the Reed Greenhouse at Traceway Retirement Community after an extended illness. He was born September 23, 1930, to Jesse Jacob and Arra Aston Mallory in Houlka. He graduated from Shannon High school in 1950. In 1955, he married the love of his life and mother of his children, Lavelle Mason Mallory and they raised their family in the Pontocola Community. Jacob was a proud veteran of  the Navy and had served his country in the Korean Conflict. He also worked as a truck driver for Dewitts Hatchery and worked almost 20 years with Penn Tire before retiring as a  foundry worker at Metaloy after 24 years of service. He was an extremely hard working man, sometimes working two or three jobs at the same time. Jacob enjoyed driving the church bus with Lakeview Baptist Church while he was a member and then with Old Union Baptist Church before his illness. He loved his family immensely and enjoyed telling a good joke as often as possible.   Survivors include Daughter, Patsy Mallory Mattox of the Pontocola Community; sons, Jacob A. Mallory (Venetia), Jr. of Old Union and Gerald Mallory of Pontocola; grandchildren, Tangi Bobo, William Martin, Craig Martin, Christopher Mallory, Lauren Mallory, Michael Herndon, Lori Moses and Amber Willhite; eleven great-grandchildren and seven great-great-grandchildren.   He was preceded in death by  parents; his wife Lavelle Mason Mallory and two sons John Herndon and Lynn Mallory.   Visitation will be from 5 until 8 pm Tuesday, December 19, 2017 at W.E. Pegues Funeral Directors.   Services with military honors will be 2:00 pm Wednesday, December 20, 2017, at the Jefferson Street Chapel of W.E. Pegues with Rev. Bob O'Neal officiating. Burial will be in Old Union Cemetery.   Pallbearers will be Blake Martin, Daylan Martin, Evan Conley, Christopher Mallory, William Martin, Craig Martin, Tyler Timmons, Timmy Bobo, and Michael Herndon.   The service will be live streamed and recorded for those who may not be able to attend at www.peguesfuneralhome.com.   Expressions of sympathy may be left at www.peguesfuneralhome.com.

Jacob A "Buster" Mallory, 87, passed away Sunday, December 17, 2017, at the Reed Greenhouse at Traceway Retirement Community after an extended illness. He was born September 23, 1930, to Jesse Jacob and Arra Aston Mallory in Houlka. He graduated... View Obituary & Service Information

The family of Jacob A. Mallory created this Life Tributes page to make it easy to share your memories.

Send flowers to the Mallory family.