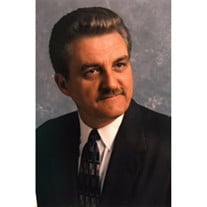 Jackie D. Spearman Birmingham formerly of Tupelo- Jackie D. Spearman, 69, died Tuesday, March 20, 2018 at Brookwood Baptist Hospital in Birmingham, Alabama. Jackie was born December 10, 1948 in Tupelo to Cecil and Jewell Spearman. In 1968 at Bethel Baptist Church in Dorsey, Jackie married the love of his life the former Gail Wilburn, together they have two children. After graduating from Itawamba Junior College, Jackie worked as a Band Director at Brilliant High School in Alabama for a couple of years before moving back to Tupelo. Starting his career in sales, in 1971, he began his tenure at MetLife Insurance Company. Jackie was a dedicated and faithful employee to MetLife and retired in 2001 due to heath issues. He was a past Rotary of Tupelo member. Jackie's family and close friends would describe him as a family man. While his children were younger he was a volunteer coach for park and recreation in Tupelo for multiple sports his children played. He loved his family especially, his grandchildren. He was a faithful and active member of Belden Baptist Church before moving to Birmingham to be closer to family. He leaves behind his wife of 49 years, Gail Spearman of Birmingham; son, Stacy Spearman and his wife, Jennifer of Tupelo; daughter, Shae Spearman of Birmingham; three grandchildren, Sydney Spearman and Jack Thomas Spearman both of Tupelo and Stella Grace Connor of Birmingham; one sister, Rebecca McCarley and her husband, Franklin and numerous nieces and nephews. He was preceded in death by his parents, Cecil and Jewell Spearman and brother, Thomas Wade Spearman. Services will be 1 p.m. Friday, March 23, 2018 at Belden Baptist Church with Rev. Jim Holcomb officiating. Graveside services will follow at Tupelo Memorial Park. W. E. Pegues Funeral Directors is in charge of the arrangements. Visitation will be 11 a.m. until service time Friday, March 23, 2018 at Belden Baptist Church. Pallbearers will be Danny Golding, Terry Lee Collier, Clint Edge, Randy Beane, Chuck Wilburn, Curtis Trawick, Jackie Bost and Gerald McRae. Memorials may be made to Belden Baptist Church, 4121 McCullough Blvd, Belden, MS 38826. Expressions of sympathy may be left at www.peguesfuneralhome.com.

The family of Jackie Spearman created this Life Tributes page to make it easy to share your memories.

Send flowers to the Spearman family.