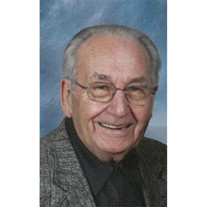 JACK B. LESLIE Mooreville - Jack B. Leslie, 89, passed away Saturday, August 6, 2016. He was born in Mooreville on June 27, 1927 to Neville Harrison and Anna Mae Ballard Leslie. He graduated from Mooreville High School and joined the United States Navy in 1945. After returning home from the military, he met Ludene Baldwin and they were married until her passing in 2001. He worked as a truck driver and retired after 54 years. Jack was a God-fearing man who loved the Lord and loved his church. Being a member of Mooreville Methodist Church, he attended until his failing health in 2015. Material things were not important to Jack. His favorite saying was "I don't need that, I have a home in 'Gloryland'". Survivors include his wife of 15 years, Billizene Fisher Leslie; sons, Jack C. Leslie (Susan), Kenneth Leslie (Patti) and Jeff Leslie (Diava); step-children, Debra Clark (Wayne), H Wayne Haynes, Jr., Lucia Randal Harrison (Dan) and Belinda McKinian (Scott); his beloved grandchildren, Russell Dunnam (Stephanie), Sue-Ane Anthony (Ricky), Brandi Plaxico (Jimmy), Samantha Robinson, Tyler Leslie, Alex Leslie, Morgan Comer (Kelby), Sam Leslie and Cayden Leslie; nine great-grandchildren and his dog, Sonny, that he loved very much. He was preceded in death by his parents, wife and mother of his children, Ludene Baldwyn Leslie, and sister, Bobbie Blanchard. Visitation will be from 5 until 8 p.m. Monday, August 8, 2016, at W. E. Pegues, Tupelo. Services will be 11 a.m. Tuesday, August 9, 2016, at the Jefferson Street Chapel of W. E. Pegues with Rev. Eric Sanford officiating. Burial will be in Mooreville Methodist Cemetery and the family will be receiving friends in the Mooreville Methodist Church Fellowship Hall following the service. Pallbearers will be his grandsons, Russell Dunnam, Tyler Leslie, Alex Leslie, Sam Leslie, Kelby Comer, Jimmy Plaxico, Haynes Randal and Cole Randal. Expressions of sympathy may be left at www.peguesfuneralhome.com.

JACK B. LESLIE Mooreville - Jack B. Leslie, 89, passed away Saturday, August 6, 2016. He was born in Mooreville on June 27, 1927 to Neville Harrison and Anna Mae Ballard Leslie. He graduated from Mooreville High School and joined the United... View Obituary & Service Information

The family of Jack B. Leslie created this Life Tributes page to make it easy to share your memories.

Send flowers to the Leslie family.