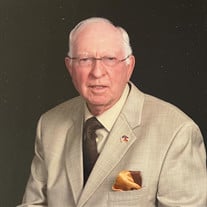 Ivy N. Duvall Tupelo- Ivy Noon Duvall, 84, went to be with his Lord and Savior on Sunday, March 13, 2022, at North Mississippi Medical Center after an extended illness. He was born December 27, 1937, in Lee County to Noon Duvall and Vera Sheffield Duvall. Ivy was a 1956 Mooreville High School graduate. On October 28, 1960, he married the former Strattie Marie Schumpert on West Jackson Street in their Pastor’s home. Ivy was a dedicated family man, always putting his wife and children above himself. During his children's younger years, he made many sacrifices so they could participate in all the activities they wanted. He worked at MidSouth Packers, Blue Bell, Rockwell and finally at Hancock Fabrics where he retired after 18 years. During his working years, he also was an expert cake maker and decorator. He would not only plan weddings with brides, but he would do everything from catering to floral arrangements. He even taught cake decorating for Wilton for over 30 years. He also enjoyed going to watch Tupelo High School basketball games through the years. Ivy was a member of First Baptist Church in Tupelo for over 40 years. He grew up at Auburn Baptist Church and dedicated his life to Christ during his membership at Auburn. Ivy is survived by his wife of 61 years, Strattie Duvall of Tupelo; two daughters, Debbie Morris and her husband, Barry, of Tupelo, and Sherry Reynolds and her husband, Rickey, of Tupelo; two grandchildren, Ryan Reynolds and his wife, Shelby, of Brandon, and Brandi Reynolds of Tupelo; and sister-in-law, Judy Duvall of Blue Springs. He was preceded in death by his parents, Noon and Vera Duvall; and two brothers, James Noah Duvall and Larry Duvall. Visitation will be 5 until 8 p.m. Wednesday, March 16, 2022, at W. E. Pegues, Tupelo. Services honoring Ivy’s life will be 11 a.m. Thursday, March 17, 2022, at the Jefferson Street Chapel of W. E. Pegues with Bro. Jackie Spencer, Dr. Todd Brady, and Bro. Matt Powell officiating and Randy Wood and Ricky Young providing special music. Burial will be at Priceville Cemetery. Pallbearers will be Buddy Duvall, Laine Mason, Kary Parker, Milton Schumpert, Tommy Schumpert, and Jordan Stevens. Honorary pallbearers will be Shann Duvall, Anthony Patton, and The Jerry Moore Sunday School Class at First Baptist Church. Memorials may be made to First Baptist Church, Harvest Fund, 300 N. Church Street, Tupelo, MS 38804, or Inpatient Hospice at North Mississippi Medical Center, 830 South Gloster Street, Tupelo, MS 38801. Expressions of sympathy and fond memories may be made at www.pegeusfuneralhome.com.

Ivy N. Duvall Tupelo- Ivy Noon Duvall, 84, went to be with his Lord and Savior on Sunday, March 13, 2022, at North Mississippi Medical Center after an extended illness. He was born December 27, 1937, in Lee County to Noon Duvall and Vera Sheffield... View Obituary & Service Information

The family of Ivy N. Duvall created this Life Tributes page to make it easy to share your memories.

Send flowers to the Duvall family.