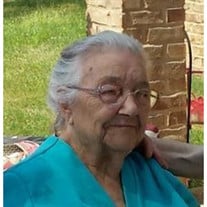 IRENE LAMB Tupelo - Irene Lamb, 90, went to be with the Lord Saturday morning, January 2, 2016 at North Mississippi Medical Center. A lifelong resident of the Tupelo area, she was born November 20, 1925 to Thomas Jefferson "Buddy" and Velma Phillips Lee. She was married to Roy W. Moore for almost 50 years and together they had five children. She later married Archie Lamb and they were married until he passed away. Irene was a great homemaker, wife, mother and grandmother and never took for granted time spent with her family. She loved people and left a loving impression on everyone that had the pleasure of meeting her. She also worked outside of the home at Lucky Star, Blue Bell, and various garment factories as a seamstress for over 20 years. She enjoyed sewing and when her children were little she made their clothing. She also worked as a nanny to Dr. Rabonowitz's family. Irene had an inspiring faith in God and was a faithful member of First United Pentecostal Church, Verona. She is survived by four of her children, Mary Moore of Tupelo, Rhonda Moore of Mooreville, Mike Moore (Vernell) and Perry Moore (Janice) of Saltillo; sister, Jean Lee Langston of Saltillo; brothers, Jerry Lee of Columbus and Charles Lee (Naomi) of Tupelo; 18 grandchildren and many many great-grandchildren. She was preceded in death by her parents; son, Thomas William "Tommy" Moore, sisters, Faye, Maudine and Loraine, and brothers, James, Russell and J.C. Visitation will be 3 until 6 p.m. , Sunday, January 3, 2016 at W. E. Pegues, Tupelo. Funeral Services will be held at 2 p.m. Monday, January 4, 2016, at First United Pentecostal Church, 1326 Palmetto Rd. Verona, MS 38879 with Pastor John McAlister officiating and special music by Becky McAlister. Her grandsons and great-grandsons will serve as pallbearers. A graveside service will follow at Unity Presbyterian Cemetery, 391 CR 1233, Plantersville, MS 38862. Expressions of sympathy may be left at www.peguesfuneralhome.com.

IRENE LAMB Tupelo - Irene Lamb, 90, went to be with the Lord Saturday morning, January 2, 2016 at North Mississippi Medical Center. A lifelong resident of the Tupelo area, she was born November 20, 1925 to Thomas Jefferson "Buddy" and Velma... View Obituary & Service Information

The family of Irene Lamb created this Life Tributes page to make it easy to share your memories.

Send flowers to the Lamb family.