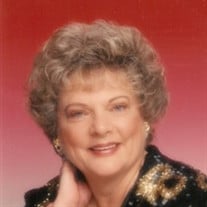 Gwenette "Gwen" Wood   Tupelo - Gwenette "Gwen" Wood, 79, passed away Sunday, July 30, 2017 at Sanctuary Hospice House after a lengthy illness. She was born September 22, 1937 to Proctor Clifton and Mary Emma Hurst in Roanoke, Virginia.   Gwen grew up in Roanoke where she graduated from William Fleming High School in 1955. She later received her bachelor's degree in nursing from the University of Virginia School of Nursing in 1958. She started her nursing career in Virginia before moving with her family to Tupelo in 1967 where she began a long and stellar career with the North Mississippi Medical Center. She worked as an Emergency Room nurse for many years. Later, Gwen served as an obstetrics supervisor for a short period but returned to the Emergency Room which she always recalled as her passion. Her greatest joy was caring for others as she volunteered at the Safe House, Gardner Simmons and the Antone Tannehill Good Samaritan Free Clinic. Gwen was also one of the first nurses at Sanctuary Hospice House when the facility opened in 2005. She was a long time member of Harrisburg Baptist Church and, while raising her family, was very involved with the church choir.   Survivors include her daughter, Cindy Wood of Tupelo; her son, Tommy Wood (Jill) of Mayfield, Kentucky; sister, Barbara French (Tom) of Dubuque, Iowa; grandchildren, Taylor Wood (Kaela Suarez) of Chesapeake Beach, Maryland and Sarah Wood and fiancé, Dustin Collins, of Mayfield, Kentucky; two great-grandchildren; nephew, Vaughn, and niece, Mary; and special friends, Cathy Smith and son, Mitch, of Tupelo and Teresa Bailey of Guntown.   She was preceded in death by her parents.   Services will be 2 p.m. Saturday, August 5, 2017 at the Jefferson Street Chapel of W. E. Pegues, Tupelo with Rev. Chuck Hampton officiating.   In lieu of flowers, donations may be made to Sanctuary Hospice House at 5159 Main Street, Tupelo, MS 38801.   Visitation will be from 12 p.m. until service time Saturday at W. E. Pegues, Tupelo.   Expressions of sympathy may be left at www.peguesfuneralhome.com.

The family of Gwen Wood created this Life Tributes page to make it easy to share your memories.

Send flowers to the Wood family.