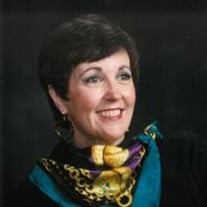 GWEN SANDERS   Tupelo - Gwendolyn Barber Sanders, 74, died at Sanctuary Hospice House in Tupelo on Tuesday, April 11, 2017. Gwen was born in Michigan City, Indiana on December 6, 1942 to Jesse Guy and Glendora Ford Barber. She grew up in Greenwood, Mississippi and attended the Mississippi University for Women before getting married and raising her own family. Raising her family was a role Gwen performed with energy, grace, humor, optimism and an inexhaustible amount of love. That love showed everywhere but most brightly in her ability to listen to her children at any time in their lives with such genuine interest that even today - especially today - they draw strength from her and the love she gave in such abundance.   That is not to say that Gwen was perfect. Her inability in the kitchen was legendary, but whether she was inadvertently serving raw chicken from the family's new microwave oven or ice cold sweet potato casserole on Thanksgiving day, nobody laughed more loudly at her mishaps than she did. Despite this tragic flaw, any one of her family would do anything for one more pop tart breakfast with her.   Her full life took her from Greenwood to Starkville, to Dallas, to Jackson, and finally Tupelo where she has lived for the past 37 years, raising three children and her beloved paint horses. She made friends everywhere she went  in her life, waking every day with a smile, but at the end of the day, it was her family that mattered more than anything to her, and she mattered far more than anything to them. It is difficult for her family to imagine the world without Gwen Sanders in it, but her family, including her husband of 52 years and their three children, will rely on the strength she gave them to get through this impossibly sad time.   Gwen in survived by her husband, Dr. C. J. Sanders; children, Dave Sanders (Bobbi), Claire Jenkins (B. G.) and Chris Sanders (Jessica); grandchildren, Abbey Sanders, David Sanders, Ford Jenkins, Emma Sanders, Caleb Sanders, Christopher Sanders and Scarlett Sanders.   Visitation will be from 5 until 8 p.m. Sunday, April 16, 2017 at W. E. Pegues, Tupelo with a rosary service to follow.   Memorial services will be 11 a.m. Monday, April 17, 2016 at St. James Catholic Church with Father Lincoln Dall officiating. ﻿  Honorary pallbearers will be John Sanders, Taylor Sanders, Ronnie Sanders and Ronnie Sanders, Jr.   In lieu of flowers, memorials may be made to St. James Catholic Church, 1911 N Gloster Street, Tupelo, MS 38804 or Sanctuary Hospice House, PO Box 2177, Tupelo, MS 38803.   Expressions of sympathy may be left at www.peguesfuneralhome.com.

The family of Gwen Sanders created this Life Tributes page to make it easy to share your memories.

Send flowers to the Sanders family.