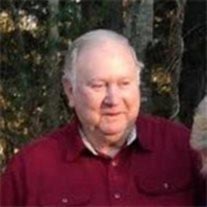 Gordon Smith Mooreville- Charles Gordon Smith, 82, has gone to be with his Heavenly Father on Tuesday, June 20, 2019 at North Mississippi Medical Center in Tupelo with his wife by his side. He was born in Mooreville, February 26, 1937 to Charlie Harrison Smith and Minnie Eola McKinney Smith.  He was a Mooreville High School Graduate. Gordon proudly served in the United States Army in Germany for four years. On January 14, 1965, he married the former Ann Richards  After 36 years of service in supervision, Gordon retired from Action Industries. One of Gordon's hobbies was cattle farming, he farmed for over 25 years before his health declined. Gordon was a member of the Masonic Lodge. He enjoyed spending time with his family and friends.  Gordon enjoyed listening and singing Gospel music. Gordon was a very active member of Boguefala Baptist Church. At Boguefala, he served as the Music Director for over 36 years, chairman of the financial committee, Sunday School Teacher and Assistant and caretaker of Boguefala Cemetery for over 30 years. He especially enjoyed Pot Luck at the Church. Survivors include his wife of 53 years, Ann Smith of Mooreville; three children, Tony Smith of Mooreville, Chris Smith and his wife, Michelle of Mooreville, Carol Watts and her husband, Ken of Clarksville, Tennessee; six grandchildren, Sydney Watts, Logan Smith, Harrison Watts, Parker Smith, Kayleigh Andrews and Brielle Caporale; one great-grandson, Carter Jones; sister-in-law, Mary Smith of Mooreville and numerous nieces and nephews. He was preceded in death by his parents, Shine and Minnie Smith; three brothers, Cecil McClear, Virgil Smith and Aubrey Smith; one infant brother, Maurice Smith; two sisters, Charlene Smith Martin and Ruby McClear Edwards; several nieces and nephews. Visitation will be 6 until 8 p.m. Saturday June 22, 2019 at W.E. Pegues, Tupelo and one hour prior to service time Sunday, June 23, 2019. Services honoring his life will be 3 p.m. Sunday, June 23, 2019. at Boguefala Baptist Church with Bro. David Perry, Bro. Royce Hawkins and Bro. Jim Manley officiating. Burial will follow at Boguefala Cemetery. W. E. Pegues Funeral Directors is in charge of the arrangements. Pallbearers will be Tony Smith, Chris Smith, Allen Estes, Ray McCollum, Jimmy Sheffield and Brad Lindsey. Honorary pallbearers will be his Sunday School Class and the Deacon's of Boguefala Baptist Church. Memorials may be made to Boguefala Baptist Church, Building Fund, 690 MS-371, Mooreville, MS 38857. Expressions of sympathy may be left at www.peguesfuneralhome.com.

Gordon Smith Mooreville- Charles Gordon Smith, 82, has gone to be with his Heavenly Father on Tuesday, June 20, 2019 at North Mississippi Medical Center in Tupelo with his wife by his side. He was born in Mooreville, February 26, 1937 to Charlie... View Obituary & Service Information

The family of Gordon Smith created this Life Tributes page to make it easy to share your memories.