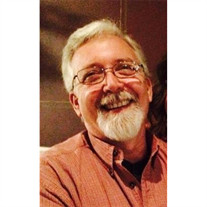 GLYNN ALAN MEEK Tupelo - Glynn Alan Meek 54, of Tupelo went home to be with the Lord on May 9, 2016 at his home in Bowling Green, Kentucky. Alan was born January 29, 1962 in Tupelo, Mississippi. He was a 1979 graduate of Mantachie High School. He was a highly treasured employee with Holley Performance Products since 2009 in both their Aberdeen and Bowling Green locations. Alan was a gentle man of great intelligence and infinite wisdom who was absolutely devoted to his wife and sons. He loved to laugh, and never took for granted the simple things in life. He was a talented, hard- working man who enjoyed bringing old things back to life. His motto was, "Use it up, wear it out, make it do, or do without." Most of his time was spent outdoors appreciating the complexity of God's creation. His ultimate joy in life was spending time with his best friend and love of his life, Jeanne, drinking coffee with his sons, Aaron and Tyson, laughing with his mother, Freda, and spoiling his dog Millie. He was a man of strong faith who believed in the power and strength of Jesus Christ's love, and the peace and beauty that would await him in his Heavenly Home. Services will be 12 p.m., Friday, May 13, 2016 at the Jefferson Street Chapel with Rev. Terry Pierce and Tim Howell officiating. A private family graveside will follow at Auburn Cemetery. He is survived by his mother, Freda Hill Meek; his wife of 27 years, Jeanne Cayson Meek; his sons, Aaron Meek and Tyson Meek (Krysta); his sister; Cathy Carter; his brother-in-law, Mike Cayson (Marie); his nephew, Ben Cayson (Evelyn); his nieces, Callie Henderson, Caroline Carter and Alix Gunner (Andrew); two great-nephews, Michael Cayson, and Liam Bentley. He is preceded in death by his father, Tommy C. Meek; grandparents, Cordie Lee and Iva Lee Hill, Tyson Claude and Callie Bell Meek; father and mother-in-law, B.H. and Betty Cayson; and brother-in-law, Phil Cayson. Pallbearers will be Danny Webb, Tim Howell, Montana May, Mike Cayson, Ben Cayson, Corbin May, and Neal Peach. Honorary pallbearer will be Tracy May. Memorial donations may be made to Tupelo Free Will Baptist Church at 1650 North Veterans Blvd, Tupelo, MS 38804 or to the American Heart Association, 4830 McWillie Circle, Jackson, MS 39206. Visitation will be 5 p.m. until 8 p.m., Thursday, May 12, 2016 at W. E. Pegues, Tupelo. Expressions of sympathy may be left at www.peguesfuneralhome.com

GLYNN ALAN MEEK Tupelo - Glynn Alan Meek 54, of Tupelo went home to be with the Lord on May 9, 2016 at his home in Bowling Green, Kentucky. Alan was born January 29, 1962 in Tupelo, Mississippi. He was a 1979 graduate of Mantachie High School.... View Obituary & Service Information

The family of Glynn Alan Meek created this Life Tributes page to make it easy to share your memories.

Send flowers to the Meek family.