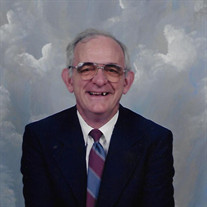 Gerald Adderholt Tupelo- Gerald Lee Adderholt, at the age of 84, died Wednesday, March 3, 2021 at North Mississippi Medical Center. A lifelong Tupelo native, Gerald was born May 13, 1936 to Alton Adderholt and Beatrice McGregor Adderholt. After high school graduation, he joined the United States Army. After serving his country for over twenty years, he retired but continued to serve in the Army National Guard. Gerald considered loving the Lord to be his main purpose in life. He was always forgiving and treated everyone like a friend. He was an active member of Priceville Baptist Church where he faithfully served in many capacities including as a Deacon and Sunday school teacher. Until his heath declined, he was the longtime caretaker of Priceville Cemetery. In his free time, Gerald enjoyed fishing, watching NASCAR and gospel concerts. He loved his family and especially enjoyed spending time with his grandchildren. He leaves behind his wife of 50 years, Helen Adderholt; two children, Amanda Wood and Derrick Adderholt and his wife, Dinah Adderholt all of Tupelo; five grandchildren, Autumn Wood, Chase Adderholt, Austin Wood, Trinity Adderholt and Abbygail Adderholt; one brother, Oliver Adderholt and his wife, Joyce of Birmingham, Alabama; and several nieces and nephews. He is preceded in death by his parents and his son, Kirk Adderholt. Visitation will be 4 until 7 p.m. Friday, March 5, 2021 at W. E. Pegues, Tupelo. Services honoring Gerald’s life will be 11 a.m. Saturday, March 6, 2021 at Priceville Baptist Church with Rev. Tim McMillan and Rev. Andy Dozier officiating. Graveside services with Military Honors will follow in Priceville Cemetery. Pallbearers will be Tommy Scruggs, Mark Patton, Jamie Zemek, Chase Adderholt, Drew Holland, and Ken Barron. Expressions of sympathy and fond memories may be left at www.peguesfuneralhome.com.

The family of Gerald Adderholt created this Life Tributes page to make it easy to share your memories.

Gerald Adderholt
Tupelo- Gerald Lee Adderholt, at the age of...

Send flowers to the Adderholt family.