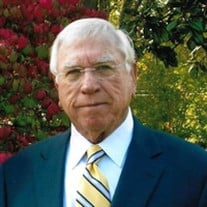 GENE BOX   Tupelo - Howell Gene Box, 86, passed away Wednesday, November 22, 2017, at North Mississippi Medical Center after a lengthy illness. He was born in Corinth April 25, 1931, to Victor Monroe and Emma Goforth Box. He was a 1950 graduate of Corinth High School where he was an outstanding football and baseball player and was awarded a football scholarship to the University of Tennessee. Unfortunately, a knee injury in high school cut short his athletic career. He attended the University of Mississippi and the University of Arkansas. Gene served in the United States Air Force and was a general aviation pilot. He owned and operated VM Box Motor Company, the Ford Dealership in Corinth. In 1977 Gene opened his first Danver's Restaurant in Tupelo; he later expanded to various locations throughout the southeast. He was a very active sportsman. Gene loved golf and won so many trophies that he began returning them to be reused. He was an active member of Calvary Baptist Church. Gene was known for his generosity.   Survivors include his wife of 22 years, Jo Ann Frazier Box of Tupelo; children, Carol Box Mote (Ron) of Destin, Florida and Cynthia Box Thomas (Bob) of Memphis, Tennessee; step-daughter, Margaret Ann Kennedy (Gregg) of Tupelo; step-son, Dr. Bill Frazier (Lydia) of Jackson and grandchildren, Jeffery Mote of Oxford, Matthew Mote (Alexis) of Destin, Florida, Drew Talley and Kate Talley Hylander (Magen) both of Memphis, Tennessee.   He was preceded in death by his son, Steven Christopher Box; brothers, Maury and Reid Box and his parents.   Visitation will be from 5 until 7 p.m. Saturday, November 25, 2017, at W. E. Pegues, Tupelo.   Services will be 2 p.m. Sunday, November 26, 2017, at Calvary Baptist Church with visitation one hour prior to service time. Dr. John G. Armistead will be officiating the services and Judge Neal Biggers and Norris "Piggy" Caldwell will be delivering eulogies. Graveside services will follow in Tupelo Memorial Park. W.E. Pegues Funeral Directors is in charge of the arrangements.   In lieu of flowers, memorials may be made to Calvary Baptist Church Fellowship Hall Kitchen Fund, 501 West Main Street, Tupelo MS 38804.   Expressions of sympathy may be left at www.peguesfuneralhome.com.

GENE BOX   Tupelo - Howell Gene Box, 86, passed away Wednesday, November 22, 2017, at North Mississippi Medical Center after a lengthy illness. He was born in Corinth April 25, 1931, to Victor Monroe and Emma Goforth Box. He was a 1950 graduate... View Obituary & Service Information

The family of Gene Box created this Life Tributes page to make it easy to share your memories.

Send flowers to the Box family.