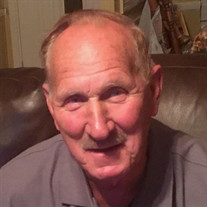 Columbus- Gary "Buck" Peters, 78 passed away on August 20th at home. He was born on May 12th, 1943 in Itawamba, County to John Henry and Wilma Sue Towery Peters. Gary grew up in Nettleton and Shannon, attending school in both places. After high school, Gary served his country honorably in the United States Army, serving in the Vietnam War. He spent many years as a truck driver and carpenter. He was really a “Jack of all trades”. There was nothing he couldn’t do or couldn’t fix from carpentry to mechanics to baking a cake. Gary was happily married to Anna Elizabeth Burns Peters for 37 years, he was a very loving and devoted husband. He was a loving father, grandfather, and great grandfather. Our precious Gary was a very kind and especially generous soul. He was always there when he was needed even in a moment’s notice to anyone in need. He was a man of few words but always spoke with such kindness. He was gifted with many skills and took such great pride in everything. He will be greatly missed by all who knew him. He is survived by his wife, Anna Peters of Columbus; three daughters, Judy Hays of Pascagoula, Billie Jean Tingle (Greg) of Pascagoula, and Susie Oglesby (David) of Columbus; and three sons, John Peters (Teri) of Vancleave, Rob Santos of Ocean Springs, and Gary Peters, JR. of Columbus. He was a loving grandfather to Kayla Jean Cervantes (Ricky), Madison Lyn Peters, Morgan Lynn Peters, Keaton Hays, Cole Tingle, Isabella Santos, Thomas Oglesby, Jack Christian Tingle, Emilia Santos, and one great-grandchild J. R. Cervantes. He is also survived by a special sister, Shirley Hawkins of Nettleton; special brothers, Jake Peters (Judy) of Nettleton, and Danny Joe Peters (Kathy) of Shannon. He was affectionately known as Uncle Buck to a host of special nieces and nephews. Gary was preceded in death by his parents, John Henry and Wilma Sue Peters; two sisters Betty Grubbs and Joyce Barnette and two brothers, Ray Peters and Rex Peters. Services honoring Gary's life will be 3 p.m. Monday, August 23, 2021, at the Jefferson Street Chapel of W. E. Pegues with Rev. Terry Harden officiating. Burial will be in Doty Chapel. Visitation will be 2 p.m. until service time at W. E. Pegues, Tupelo. The service will be live-streamed and recorded for those unable to attend. Expressions of sympathy may be left at www.peguesfuneralhome.com.

Columbus- Gary "Buck" Peters, 78 passed away on August 20th at home. He was born on May 12th, 1943 in Itawamba, County to John Henry and Wilma Sue Towery Peters. Gary grew up in Nettleton and Shannon, attending school in both places. After high... View Obituary & Service Information

The family of Gary Lyn Peters created this Life Tributes page to make it easy to share your memories.

Send flowers to the Peters family.