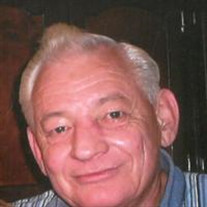 GARY A. POE   Mooreville - Gary Allen Poe, 69, passed away Thursday, April 13, 2017, at his home. He was born July 30, 1947, to Leonard and Mary Lydia Buskirk Poe.  He was a truck driver during his working life until his retirement. On January... View Obituary & Service Information

The family of Gary A. Poe created this Life Tributes page to make it easy to share your memories.

Send flowers to the A. family.