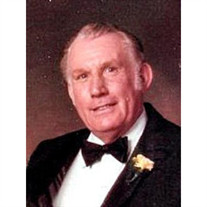 G.W. JOBE JR. Tupelo - G.W. (George Wesley) Jobe of Tupelo, Mississippi passed away Wednesday, February 3, 2016 at North Mississippi Medical Center after a brief illness. Mr. Jobe was born January 9, 1930, in Nettleton, Mississippi. He grew up in the Evergreen/New Chapel community, son of the late Theresa Bethay and George Wesley Jobe. He served in the U.S. Navy, stationed in Long Beach, California, from 1949 to 1953. He attended Mississippi State University upon his discharge from the Navy. However, G.W. was a staunch Ole Miss fan. For most of Mr. Jobe's professional career he sold brick and block throughout the tri-state area. He loved being a part of the building industry and was often asked to help identify the brick previously used in building projects. G.W. and his wife, Lucille, were members of Wesley United Methodist Church where they shared life-long friendships with members of the Wesleyan Sunday School Class for nearly 60 years. The children particularly wish to say thank you to Ruth and Ray Wilkinson and family, the families of Charles and Bama Strawn, Jimmy and Inez Langford, David and Carolyn Andrews, Winfred and Elaine Hudson for the love, affection and memories we share. May God continue to bless and keep each of you and the Wesleyan Class from generation to generation for that is the gift He gave to us. Services will be 9:30 a.m. Saturday, February 6, 2016, at The Jefferson Street Chapel of W. E. Pegues, Tupelo with Rev. Roger Puhr officiating. Burial will be at New Chapel. Mr. Jobe was preceded in death by his wife of 53 years, Lucille Donald Jobe; beloved brother and sister-in-law, James Wesley and Mary Alice Hussey Jobe. Mr. Jobe is survived by children; Martha Leigh Murphy (Thomas Stewart Murphy) of Madison, Mississippi, James Linden "Len" Jobe (Susie White Jobe) of Pontotoc, Mississippi and Margaret Ree Curtis (Bradley A. Curtis) of Raymond, Mississippi; grandchildren, Lillian Bethay Curtis of Dallas, Texas; Zachary Allen Curtis of Tupelo, Mississippi, Nathan Rainer of Jacksonville, Florida, and great-granddaughter Lorena Zambrano of Dallas, Texas. Mr. Jobe is also survived by a sister, Diane Jobe and many nieces and nephews. Visitation will be 4 p.m. until 7 p.m., Friday, February 5, 2016, at W. E. Pegues, Tupelo. In lieu of flowers, the family respectfully request memorials be made to Methodist Senior Service "Sunday Fund", P.O. Box 1567, Tupelo, MS 38802. Expressions of sympathy may be left at www.peguesfuneralhome.com

The family of G. W. Jobe, Jr. created this Life Tributes page to make it easy to share your memories.