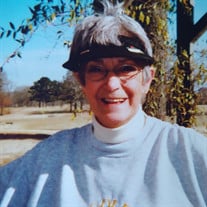 Saltillo--Ethel Louise MacFarlane passed away Saturday, November 20, 2021 at the North Mississippi Medical Center after an extended illness. She was 82 years old. Ethel was born July 5, 1939, in South Weymouth, Massachusetts, the daughter of James A. and Hazel Cole MacFarlane. After spending her childhood in Massachusetts, she settled in North Mississippi where she worked as a hairdresser. The past 25 years were spent in Saltillo. Ethel was a tremendous athlete who played every sport during her high school days. She was an avid golfer achieving club champion. Ethel was the greatest fan ever of her New England Patriots and particularly, Tom Brady. She leaves behind her two daughters, Betsy Harris of Tupelo, and Lisa Sweasy and her husband, Bryan, of Ft. Mitchell, Kentucky; four grandchildren, Chris Harris and his wife, Jackie, Elizabeth McGinty and her husband, Brian, Cole Sweasy and Natalie Sweasy; four great-grandchildren, Karmah McGinty, Quade Harris, Adeline McGinty, and Delaney Harris; and numerous nieces and nephews. Ethel was preceded in death by her parents and three brothers, James, George, and her beloved Ray. A memorial service celebrating Ethel’s life will be held at 6 p.m. Tuesday at W.E. Pegues, Tupelo. In lieu of flowers, donations may be made to Guide Dogs For The Blind at www.guidedogs.com. Friends and family may leave expressions of sympathy at www.peguesfuneralhome.com.

The family of Ethel MacFarlane created this Life Tributes page to make it easy to share your memories.

Send flowers to the MacFarlane family.