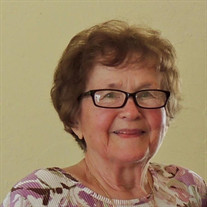 Emma (Emmi) Hillebrecht, 92, passed away on February 3, 2022, at home in Traceway Retirement Community inTupelo, where she had resided since 2012. She is survived by her sisters Lottie Moorman and Ida Struck, numerous nieces and nephews, great-nieces and great-nephews and cousins. Although without children of her own, she was a loving maternal figure to many that she came to “adopt” and love. Her feistiness, strength, and independence were at the core of her kind, warm heart. Emma, the fifth of eleven children, was predeceased by her husband Willi Hillebrecht, dear long-time companion Charles “Ted” Jarema, her parents, Albert and Pauline (Polnau) Neumann, brothers Albert, Alfons, Hugo, Otto, Paul and Horst, and sisters Klara George and Ruth Duffy. In1945, at the end of World War II, the family had to leave their homeland in East Germany (West Prussia) and flee west from the advancing Russian army. At 15, Emma had to drive the second horse-drawn carriage behind her father because her brothers were at war. During this dangerous time, she mastered the difficult task with much strength and responsibility for her family and herself. Emma and her husband Willi emigrated to the United States from Germany in 1955, shortly after their marriage. Emma had a thirst for learning, teaching herself how to speak, read and write English, among many other things. She was incredibly organized and knowledgeable. In 1959, they purchased a dairy farm in upstate New York, where they lived until 1982. Following Willi's death, Emma moved to Mississippi to be closer to her sister, Lottie. She and Ted enjoyed road trips and were always on an adventure somewhere. While at home, Emma loved to be outdoors in the garden with her flowers and vegetables, or in the kitchen baking. She left us all with many beautiful memories and is dearly missed already. Visitation will be 1 p.m. until service time Friday, February 18, 2022 at W.E. Pegues, Tupelo. A memorial service celebrating Emma’s life will follow at 2 p.m. in the Jefferson Street Chapel. Expressions of sympathy and fond memories may be shared at www.peguesfuneralhome.com.

Emma (Emmi) Hillebrecht, 92, passed away on February 3, 2022, at home in Traceway Retirement Community inTupelo, where she had resided since 2012. She is survived by her sisters Lottie Moorman and Ida Struck, numerous nieces and nephews,... View Obituary & Service Information

The family of Emma Hillebrecht created this Life Tributes page to make it easy to share your memories.

Send flowers to the Hillebrecht family.